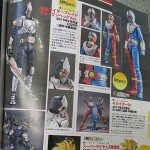 Another set of magazine scans is still making the rounds tonight and we’ve got a couple of more figure confirmations.

First up is the next release in the Kikaider series of Figuarts. It’s Jiro’s brother Ichiro, S.H. Figuarts Kikaider 01! Kikaider 01 looks to be a pretty standard release much like the recently released Kikaider. Like his brother, Kikaider 01 will also be a Tamashii Web Exclusive set for April 2015 for 5184 yen.

Next up is an odd one that’s sure to please Kamen Rider Blade fans. The elusive and popular S.H. Figuarts Kamen Rider Blade is getting a reissue, with a twist! This Blade will be released as a battle damaged Broken Head Version! It will include a damaged helmet with a partially revealed face of our hero Kazuma Kenzaki! A Tamashii Web Exclusive S.H. Figuarts Blade Broken Version will be out in April 2015 for 4320 yen.