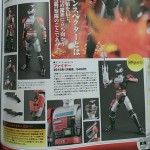 In yet another surprise turn of events thanks to Figure Oh Magazine scans we’ve just been alerted to the release of another figure recently shown off as a prototype at Tamashii Summer Collection! From the classic Metal Hero series Tokkei Winspector, we can finally confirm release details for S.H. Figaurts Fire!

Fire, also known by his civilian name Ryoma, is the leader of the Winspector trio and as such it’s fitting that Fire should be released first. However even more fitting is that this figure will be a standard retail release! Fire looks to at least include his Daytric M2 pistol and his massive Maxcalibur arm blade & also appears to feature a working visor! No word yet on wether Fire may include his other signature weapon the Gigastreamer or his Fire Badge but we’ll keep you on top of all the information related to this release.

S.H. Figaurts Fire will be released at retail in January for 6480 yen!