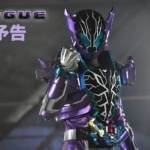 This side-story will focus on Build’s Gentoku Hiromu to explore his origins and abilities.

Rogue will be divided into three parts:

*Night Rogue Rises takes place in the past and details the early days of FAUST.

*Dark Night Fall is set shortly after Gentoku’s departure from the Touto region.

*Kamen Rider Rogue focuses on the return & rebirth of this new Rider.

Each episode will be included on the Kamen Rider Build Blu Ray releases. The first release is currently scheduled for March 28 2018!