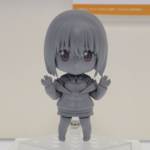 In case you missed it Max Factory announced that three SSSS Gridman characters were on their way to Figma: Gridman himself, along with Akane and Rikka. But it seems like Figma won’t be the only way for collectors to enjoy those characters: with Goodsmile’s Nendoroid SSSS.Gridman, Rikka, and Akane were also just recently revealed in cute chibified forms.

At the moment, only Gridman himself appears to be fully painted with Akane still in the early development with Akane only existing as concept art.

Be sure to stay tuned to Tokunation though, and we’ll bring you more info as it becomes available.