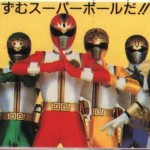 Hey Tokusatsu fans! Last week, we invited you to join our new weekly feature titled “Let’s Watch Wednesdays” where each Wednesday we begin the task of watching more episodes of past Tokusatsu series!

This week we continue with the same series!

You can find your Sentai and Kamen Rider series via Torrent through your favorite subbing groups, or for direct download at KRDL.INFO. For Power Rangers, simply check out Netflix streaming on your PC, SmartPhone, or favorite Video Gaming console.