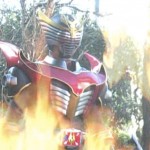 Both Kamen Rider Ryuki and Dairanger lasted for 50 episodes and this week for Let’s Watch Wednesdays At Tokunation.com, we discuss the last 5 episodes of each series! Click on the following to join the respective discussions!:

Will Kamen Rider Zolda and Magna Giga finally manage to take someone out with their “really cool attack”? Will Kitaoka finally manage to win over Momoi Reiko? Who will Asakura destroy next, or rather, who will vex him this time? Will Shinji find a way to finally stop the Rider War, or will Kanzaki Shirou’s ultimate plan of having 1 rider left become reality?

Oh and hey…where did Goro-chan sneak off to?…..Join us to discuss the last 5 episodes of Kamen Rider Ryuki and Dairanger!