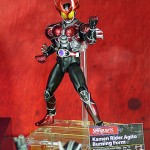 While nothing new has been announced yet several prototypes were shown on display.

Shown in the display were S.H.Figuarts Agito Burning Form and the Recently announced S.H.Figuarts Delta. Along with Figuarts Blue Spader and the S.I.C Hoppers Two pack. Make the jump to check out the photos taken by Cybergundam.