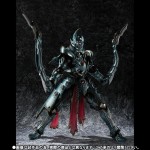 Also coming in March 2014 as a Tamashii Web Exclusive[/URL] will be the last-to-be-released armour from Garo The One Who Shines in the Darkness – Sky Bow Knight Gai, armour of Makai Knight Aguri Kusagami.

This entry in the Makai Kadou line will be priced 6090 yen. Check out the official image gallery after the jump!