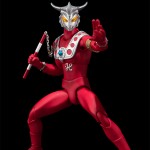 Ultraman Leo will be released in March 2014 (not February as we previously reported), priced 3990 yen. Check out the official image gallery after the jump.