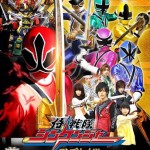 The 33rd Super Sentai makes the transition to high-definition video!

“Samurai Sentai Shinkenger” has been selected for Blu-Ray release and will be made available in three box sets.