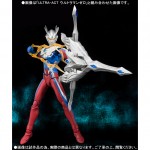 The Ultra-Act line continues its figure renewals with a brand new renewal version of Ultimate Zero, the powered up form that made its debut in Ultraman Zero: The Revenge of Belial! A powered up form granted to Zero by the mysterious Ultraman Noa!

Releasing as a Tamashii web exclusive figure in September, renewal Ultimate Zero comes packaged with a selection of alternate hands, the Ultimate Bracelet, Ultimate Zero sword and the Shield of Baradhi. These weapons can also combine to form the Ultimate Aegis.