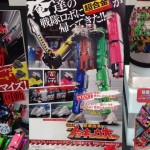 Another teaser from Tokyo Toy Show  has revealed some surprising news: Ressha Sentai ToQGer will be joining Bandai’s Chogkin series of die cast toys starting with of course a re-making of the DX ToQOh with some new pieces.

But shockingly, the line will also contain the enemy mecha as well with the Dark Liner Robos of the Shadow Line having been teased.
For now there’s no word when the Dark Liner Robo will see release, but TokQoh is listed as 12,000 yen and exclusive to Premium Bandai