Power Rangers Monday is back! Over the course of the 20 year history of Power Rangers, there have been some amazing battles that still stick with us to this day. Some of the more infamous battles over the course of the franchise’s history include things like the Red Ranger fighting the Green Ranger during Mighty Morphin Power Rangers, as well as the White Ranger vs Green Ranger battle from the third season of Mighty Morphin Power Rangers. And then there’s the team ups – everything from two seasons coming together to the anniversary battles of Forever Red and Once A Ranger.

We decided to dig a little deeper – leaving all the season team up episodes and anniversary episodes behind. Those will always be awesome and may always be in your top 5. So let’s take a look back at some of the other greatest battles in the history of Power Rangers. Ranger up, get yourself ready, and may the power protect you as you read through our list! Click “Read More” to see what we came up with!!

During the second season of Mighty Morphin Power Rangers, Tommy, the Green Ranger, was on borrowed time. His powers were originally drained using the Green Candle (by Rita Repulsa in Season One) but were restored by Zordon. However, the power was only temporary, and Tommy only had so many times that he could morph in to battle before the powers totally gave out.

Lord Zedd eventually made Tommy his primary target – he figured if he destroyed the Green Ranger, it would be easier to destroy the other Power Rangers. While that idea would have made sense if Tommy was at full power, he wasn’t – his Dragonzord was barely controlable at this point with his powers being so weak, and the other Rangers were stronger than ever thanks to the Thunderzords. 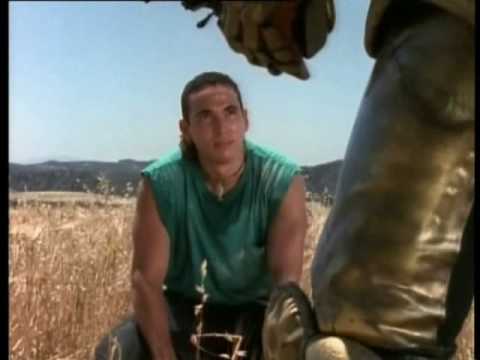 In all honesty, this was one of JDF’s most poorly acted scenes in the franchise

Anyways, Tommy is transported to another dimension and Goldar eventually shows up to humiliate him. He shows him a slideshow of his time as the Green Ranger, hoping that it will make Tommy’s will weaken and break as he realizes that he can no longer be the hero. Instead, it motivates Tommy (he states the slideshow showed him how much good he’s done, not just as the Green Ranger, but as Plain Old Tommy) and he fights Goldar unmorphed, winning, while the “Go Green Ranger” music plays in the background.

For it’s time it was an epic battle. It cemented Tommy in my mind as a kid as the ultimate badass and that he could probably defeat most of Lord Zedd’s monsters without being a Power Ranger. Obviously other kids had the same idea, as Tommy, and his actor Jason David Frank, remain one of the most popular characters in Power Rangers to this day.

Astronema creates a monster that has the ability to switch places with whomever its tongue is attached to (kinky). Carlos, the Black Ranger, goes to strike the monster but it switches places with Cassie, the Pink Ranger, and Carlos severely injures Cassie’s arm, making her useless in battle. Carlos loses all confidence in himself and his abilities. As he’s sulking, the monster attacks him but Carlos is saved by none other than Adam, the second Mighty Morphin Black Ranger, and the one who passed his Green Turbo powers to Carlos during Power Rangers Turbo.

Together the former and current Rangers train – both to increase Carlos’s skill, and to help him regain his confidence. But he can’t fight blindfolded, gets pissed off, and storms off saying he’s quit the Rangers. It’s at that point we discover that Adam still has the original Mastadon coin from when Rito Revulto destroyed the Thunderzords in Season Three of Mighty Morphin Power Rangers. Alpha 6 tells him he must never use it, the powers were destroyed and it could destroy him if he tried to activate it. He laughs it off. 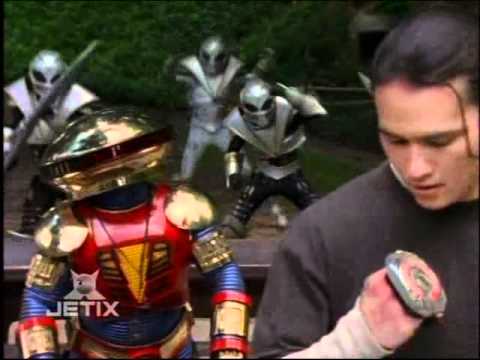 Let’s be honest. The only one concerned for Adam’s safety is Alpha, EVERYONE ELSE ALIVE wanted Adam to morph again!

AND THEN USES IT TO BECOME THE BLACK MIGHTY MORPHIN POWER RANGER AND SAVE CARLOS AND KICK ALIEN MONSTER BUTT.

However, the power is lost even faster than Tommy’s Green Ranger powers were, and Adam seems to be injured in the process. While the battle wasn’t long, it was still incredibly kick-ass to see the original Black Ranger suit with the current Black Ranger suit. Astronema even makes the comment “TWO Black Rangers?!”. It was awesome, seeing Adam again was awesome, and for the longest time it was the favorite episode of many Power Rangers’ fans.

Power Rangers RPM was one of those series that you love or you hate. It was a drastic step away from the light-heartedness of previous seasons, as the setting was a post-apocalyptic world where an evil computer had conquered, enslaved, and wiped out most of mankind. One of his generals, Shifter, eventually goes AWOL after his fellow henchmen re-wire his creation and it attacks Venjix. Shifter swears vengeance, and his first plan is to take control of the Power Rangers using a special screw-looking thing. 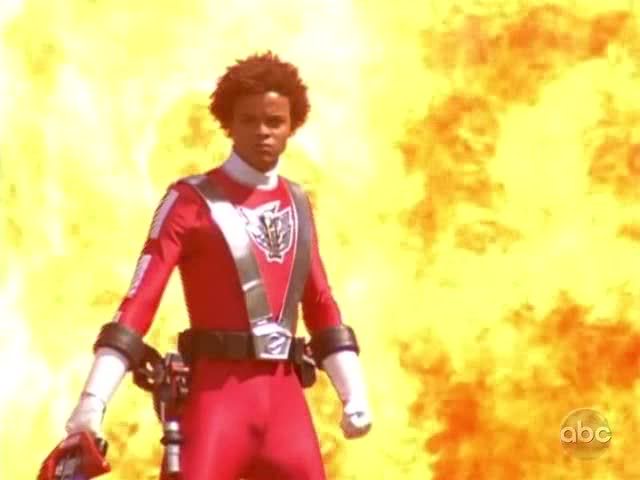 This elevated Scott as one of the coolest Red Rangers in MY opinion. Off screen Gem is seizuring from excitement.

It injects itself in to Scott, the Red Ranger, and he’s unable to stop himself as he fights the other Rangers. Eventually, he breaks free and wants one thing – revenge. This leads to a Scott vs. Shifter battle of epic proportions. An original fight scene which featured tons of pyrotechnics and wire-fu action, it was one of the best scenes that Power Rangers had over the last few years. The best part? Scott’s Red Ranger helmet flies off at the end of the battle, so as Shifter blows up, there’s Scott holding his Street Saber as a giant fireball blows up behind him.

Tommy always gets the badass fight scenes. When Power Rangers Dino Thunder was first announced, someone got their hands on a flier that stated the team was led by Doctor Tommy Oliver, which the fandom went crazy about – it meant Jason David Frank was returning. And return he did – classic Tommy (well, almost) was back AND he was leading the team. Throughout the season we got glimpses and nods back to his previous Ranger incarnations – either through photographs or through one-liners. And towards the end of the season, fans of Tommy got their wish in the episode “Fighting Spirit”.

Tommy had been in an amber-like prison and when he was freed, he was unable to de-morph. But once they managed to get him back to normal, they knocked him in to a coma and he was fighting for his life. But the fight was inside his mind. Tommy begins his fight for survival in what looks like a desert when a familiar melody and familiar boots appear – the Red Zeo Ranger.

Sticking true to continuity (“…but that’s impossible”) by not explaining HOW it was impossible, Tommy fights his old Ranger form. I remember, as a college student, being excited for this. And after that? The White Ranger appears. I no longer cared about the White Ranger fight, because I, and everyone else, knew what was coming next. And as Tommy put it so perfectly – “I thought I might run in to you”. 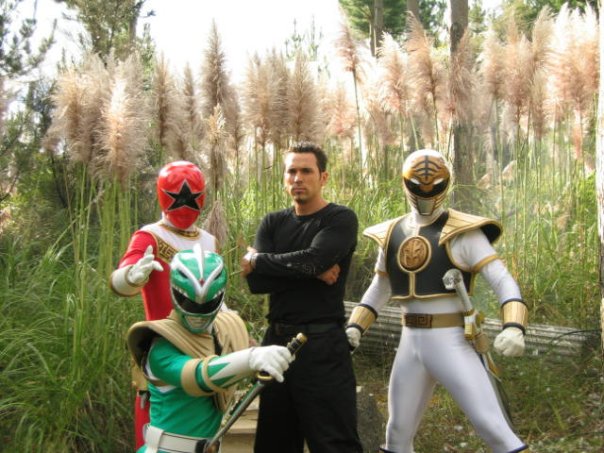 Hey look, a silver stripe on the Green Ranger! This won’t divide the fandom AT ALL!

Anyhow, Tommy eventually defeats his former Ranger incarnations and wakes up, joins the others, and saves the day. It was a great way to bring the character back on to the screen (he had been back at home during filming and was simply ADR’ing his “in suit” parts). It was also a perfect throwback to both the history of the character as well as to the fans who still watched the show.

“WHAT?!” you scream. “WHERE IS FOREVER RED?! WHAT ABOUT ONCE A RANGER?!” Yes, I get it – those were awesome battles too. But with those episodes you KNEW they were coming. The whole purpose of a team-up episode is for a big cool fight at the end. And our number one selection is where its at because, honestly, a lot of people didn’t see it coming until the episode right before. 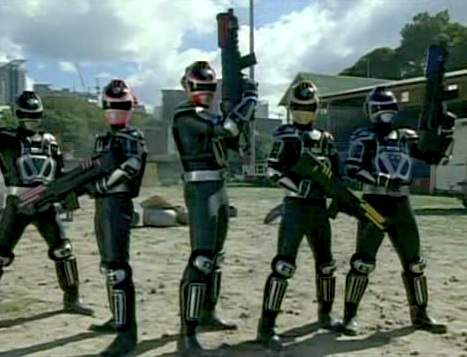 It’s like the In Space Rangers had kids with the Psycho Rangers or something. IT WAS AWESOME!

In Power Rangers SPD, our heroes are actually the second-string heroes, the B-Squad. They are only elevated to “active” status when the A-Squad, the elite, go missing. Go through an entire season until the last couple of episodes when the A-Squad is found alive and well, and you end up with an interesting set up. The A-Squad has turned against Space Patrol Delta on their own free will and joined Emperor Grumm. They kidnap Doggie and the B-Squad is in total shock. And their mad. And all they want to do is kick some butt, because all they’ve ever heard is how awesome A-Squad is, how elite A-Squad is, and they felt cheated when Doggie immediately dismisses the B-Squad in favor of A-Squad upon their return.

So when A-Squad, post-kidnapping, decides to challenge them to a fight – our heroes rush in and then walk in slow motion with random explosions. The A-Squad Rangers were, more or less, SWAT versions of the In Space Power Rangers (same helmets, but green instead of black). They also had a female Red Ranger (the first one ever at the time and she’s evil, d’oh!).

It’s an epic battle between the Rangers of each color, and in a lot of ways, symbolizes how far they’ve come individually as they, one by one, defeat their “superior A-Squad version”. After they’ve beaten them, you could only help but feel that nothing was going to stop them now – Grumm would be defeated, Doggie would be saved, and our heroes would become the new A-Squad.

Fans waited an entire season for the resolution to the mystery of the A-Squad Power Rangers, and they were given quite the treat. Because of that, we make it our number one most awesome fight – it doesn’t hurt that it was a kick-butt fight too!

So what did you think of our list of the Top 5 Greatest Battles in Power Rangers? Do you agree? Do you disagree? Come and join in the discussion and share your Top 5 battles! We purposely left out team-ups and anniversary episodes, so keep that in mind when replying. We’ll see you next week with another edition of Power Rangers Monday!