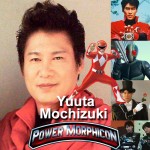 Today was one of the biggest announcements yet for this year’s Official Power Morphicon convention. Promising an unbelievable announcement for today’s guest revealing was an understatement – fans of Power Rangers and Super Sentai now have a reason to come together.

Also from the press release sent directly from the Official Power Morphicon convention comes the announcement that Hiroshi Maeda, a professional Japanese stunt actor, will be appearing at the show. You’ll know him best as the stunt actor for Tyranno Ranger in Zyuranger, as well as numerous other Red Rangers for the Power Rangers franchise. And last but not least – Yasuhiro Takeuchi, another Japanese stunt actor who played both Dragon Ranger in Zyuranger as well as the Green Ranger in Mighty Morphin Power Rangers. On top of that, he has also worn many of the Megazord suits for filming.

The Official Power Morphicon convention happens August 22nd to August 24th at the Pasadena Convention Center in Pasadena, California. Tickets are still available (but only for a couple of more weeks) – click here to begin your registration process so you don’t miss out!

Please read the full press release after the jump!

The three-day event will be held on August 22-24th at the Pasadena Convention Center.

Yuuta Mochizuki is best known for his role as Geki, the red Tyranno Ranger, from Kyoryu Sentai Zyuranger, which Mighty Morphin Power Rangers, was adapted from.

Mochizuki is also known as J1 of the Neo-Jetman in Choujin Sentai Jetman, played the role of Koji Segawa/KamenRider J and has performed as the second Tuxedo Mask in the Sailor Moon musical.

Mochizuki recently reprised his role as Geki in the 2014 film, Kyoryuger vs Go-Busters: The Great Dinosaur Battle! Farewell our Eternal Friends.

Hiroshi Maeda is a professional Japanese stunt man and suit actor who is best known for portraying the Tyranno Ranger in the 1992 Super Sentai series Kyoryu Sentai Zyuranger.

Yasuhiro Takeuchi is a professional Japanese stunt man and suit actor who is known to have recurring roles in many Super Sentai series. Takeuchi has worn both Rangers and mecha (zords) suits.

Takeuchi is one of two stunt actors to portray the Dragon Ranger in Kyoryu Sentai Zyuranger (the Green Ranger in Mighty Morphin Power Rangers).

All three actors will join over 100 confirmed guests at Power Morphicon next month.

This will mark the first time a Japanese Super Sentai actor, Yuuta Mochizuki, will be meeting his American Power Ranger counterpart, Austin St. John, both of whom played the lead role in their respective series as the Red Ranger.

More information about Power Morphicon can be found online at http://officialpowermorphicon.com

Power Morphicon is a three-day convention held every two years that celebrates Power Rangers and related series such as VR Troopers, Beetleborgs, Kamen Rider and the Teenage Mutant Ninja Turtles. The three-day event brings in over 5,000 people from all over the world to participate in cosplay events, panels featuring all guests, breakfast with the guests, martial arts demo/classes, prop/FX workshop, and more. Power Morphicon is a local business owned by painter and artist, Scott Zillner, and is an event that is directed by an all volunteer, unpaid staff.