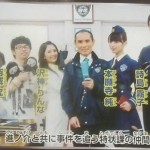 We continue to learn more about the 15th Hesei-Era Kamen Rider!

As previously reported, the villains of this new series are called the Roimude. These creatures apparently use small devices known as Viral Cores similar to Drive’s own Shift Cars. Could there be a shared origin between these monsters and Kamen Rider Drive? We may find out soon so stay tuned!

*Kyuu Saijou (the scientist in charge of network processing)

Definitely seems like a good team so far! Tune in October 5th to see the Kamen Rider Drive crew in action!