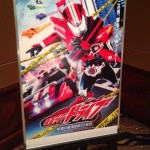 At long last we know who will be the driving force behind the new Kamen Rider series!

Definitely an established crew with a lot of talent & experience. We can only hope this means good things ahead for the 15th Hesei Rider!