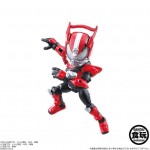 Despite having gone up from preorder a while ago, official images have finally arrived of the forthcoming fourth wave of 66 Action Kamen Rider candy toy figures. This wave will be made up of Kamen Rider Gaim Kachidoki Arms, Kamen Rider Wizard Flame Style, Kamen Rider Faiz and the latest Rider to join the franchise – Kamen Rider Drive!

This matches up to the initial leak of Kachidoki, Wizard and Faiz that happened around the release of wave 3, with Drive making up the fourth member. If the previous two waves are anything to go by, it will also include a chase variant of some sort.

66 Action Kamen Riders wave 4 will be released in December, costing 380 yen per figure.