For the first official day of celebration we are taking a look at the movie riders of Kamen Rider Gaim! These are the Riders that appeared only in movies (and maybe showed up in an episode to tie in to the movies). Over the course of three movies there have been some exclusive riders (most notably the Kamen Rider Gaim Summer Movie). And while a majority of us wait for a release of the summer movie on DVD, the other two movies are available and we’ve experienced them.

Kamen Rider Bujin Gaim was the first movie rider of the series in the Kamen Rider Gaim & Wizard – The Fateful Sengoku Movie Battle. From an alternate universe possessing powers that look very similar to our hero Kamen Rider Gaim, Bujin Gaim had the same armor only colored red and using the Blood Orange Lock Seed. In this world, the Bujin Riders are actually powerful warriors that work for various Sengoku Period warlords in the timeline of Oda Nobunaga and Tokugawa Ieaysu. For those who aren’t major Japanese history buffs, that’s an actual period of time and those warlords actually existed and fought during feudal Japan for control of the entire country. The translation is, obviously, Warring States, and the Sengoku Driver owes its name to that period of time. When you look at it with all that information in hand it’s a pretty awesome nod.

In one of the more anticipated movies from the last year, the Kamen Rider Taisen: Heisei Rider vs Show Rider Movie, we are introduced to the character known as Ren Aoi, who just happens to be able to transform in to the evil Kamen Rider Fifteen. The actual story of Ren Aoi is very tragic – a loving family man, he gives in to despair after losing his young son, and ends up joining the evil Badan Empire who then use his despair to help transform him in to Kamen Rider Fifteen and brainwash him in to being their evil Kamen Rider.

Fifteen uses the Hesei Lock Seed, allowing him to use the powers of any Heisei Rider. He is immensely powerful being shown defeating even Kamen Rider Zangetsu Shin, who is made out to be incredibly powerful in the Kamen Rider Gaim television series at that point. Fifteen discovers that his son is still alive in Zawame City, the home of the characters of Kamen Rider Gaim, and wants his son to come with him and use his powers for the Mega Reverse Project. However his son refuses, and in short, Kamen Rider Gaim uses the Showa Lock Seed to transform in to Kamen Rider Gaim 1 Arms. After being defeated and his powers destroyed, Ren Aoi realized what he had done. Thanks to the Showa Riders, Ren Aoi is able to reunite his son and his wife together as they watch their son fade away.

The final (as of now) movie for Kamen Rider Gaim is the summer movie – Kamen Rider Gaim – the Great Soccer Battle! The Golden Fruit Cup! This movie features not one, not two, but three movie-exclusive Kamen Riders (even if one is simply a new belt). Beware, the below information contains major spoilers for the movie!

For starters, it is important to note that this world doesn’t really exist – it’s a dream world created by Lapis, who ends up being Kamen Rider Kamuro. More on that later. Professor Ryouma, aka Kamen Rider Duke, is researching and discovers that the Overlords of Helheim Forest created an artificial Fruit of Wisdom, and manages to release the artificial fruit, which ends up killing him (RIP).

The artificial fruit that was created by the Overlords has become sentient and takes the form of a man named Kogane who is then able to transform in to Kamen Rider Mars. This being then attempts to control the Armored Riders and eventually become a God of the new world. It is the one responsible for the demise of the Overlord world of Helheim by having its inhabitants fight for power, and intends to the same in the world of Kamen Rider Gaim. With the help of Kamen Rider Kamuro, Kamen Rider Mars is destroyed by all the Kamen Rider Gaim Riders (minus Duke and Sigurd).

HOWEVER! It is reported that in the finale of the Kamen Rider Gaim television series, Kamen Rider Jam is none other than Kogane, now in the form of a young girl, surviving the attack from the Riders in the dream world and now here to destroy our world. How will they defeat Kamen Rider Jam? Watch the finale on the live stream on Saturday, September 27th!

The other main rider from the Kamen Rider Gaim Summer Movie is none other than a young man named Lapis who becomes Kamen Rider Kamuro. As it turns out, Lapis is actually the fourth main Overlord named Shamubishe, and he had created the dream world to live in a place away from the fighting that destroyed the world of Helheim. He is the one who sealed away the artificial Fruit of Wisdom that Professor Ryouma discovered and broke the seal of (which resulted in his death in this alternate world). He is given the Silver Apple Lock Seed by DJ Sagura in order to help the others destroy Kamen Rider Mars and becomes Kamen Rider Kamuro. 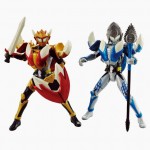 Fun fact? And major spoiler! Lapis is actually deceased for entire movie – his remains are shown during the credits in Helheim Forest, meaning his power lasted all the way through his death in wanting to keep the artificial Fruit of Wisdom sealed away.

A special thanks to our friends at the Tokusatsu Network for their plot synopsis of the Kamen Rider Gaim Summer Movie. You can read the full version of the plot of the movie by clicking here.

Check back tomorrow for Day Two of our Kamen Rider Gaim Celebration as we take a look at the group we like to call the Nut Bros – Kamen Rider Gridon, Kamen Rider Kurokage/Kurokage Troopers, and Kamen Rider Knuckle! Thanks for reading and we hope you enjoyed!!