It is now day two of our celebration and we thought it would be fun to celebrate a group of Riders that, because of their Lock Seeds, have been dubbed in some circles as the Nut Bros.. They would be Kamen Rider Kurokage, Kamen Rider Gridon, and of course, Kamen Rider Knuckle. And while the “bros” part is more appropriately given to Kurokage and Gridon for their relationship at the start of the series, it also felt worthy to include Knuckle in the group as well.

Please click “Read More” to see our entire article on these three popular Riders! But of course be warned – there are major SPOILERS in doing so, as we look at their history throughout the show and in toy form. So join us as we look at our Nut Bros. – Kamen Rider Kurokage, Kamen Rider Gridon, and Kamen Rider Knuckle!

In the early episodes of Kamen Rider Gaim the main story line involved Sid the Lock Seed Dealer handing out six different Sengoku Drivers to various dance groups which allowed them to use their Lock Seeds to transform in to powerful Armored Riders instead of relying on the Pokemon-esque battling system that the Lock Seeds alone offered. The first three to receive their Sengoku Drivers were Kouta, Kaito, and Mitsuzane. With Team Gaim possessing two Armored Riders it pushed two individuals in to a likely meeting with the mysterious Sid which resulted in their own Sengoku Drivers. This is the story of the original Nut Bros. – this is the story of Kamen Rider Kurokage and Kamen Rider Gridon.

Ryoji Hase was the leader of the Team Raid Wild dance group – a group that looked like a bunch of street thugs. One of his good friends was Hideyasu Jonouchi and together they schemed on how they could become stronger and raise their dance teams in the rankings. They are given Sengoku Drivers by the Lock Seed dealer Sid and form an alliance with Kumon Kaito also known as Kamen Rider Baron who, thanks to the use of his new powers, was neck and neck with the members of Team Gaim. 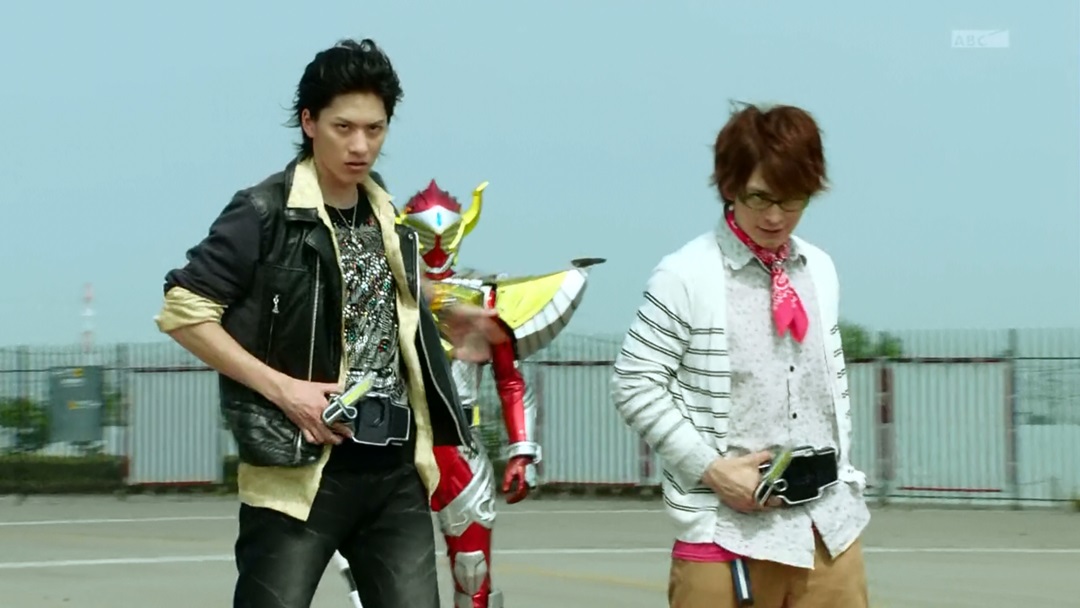 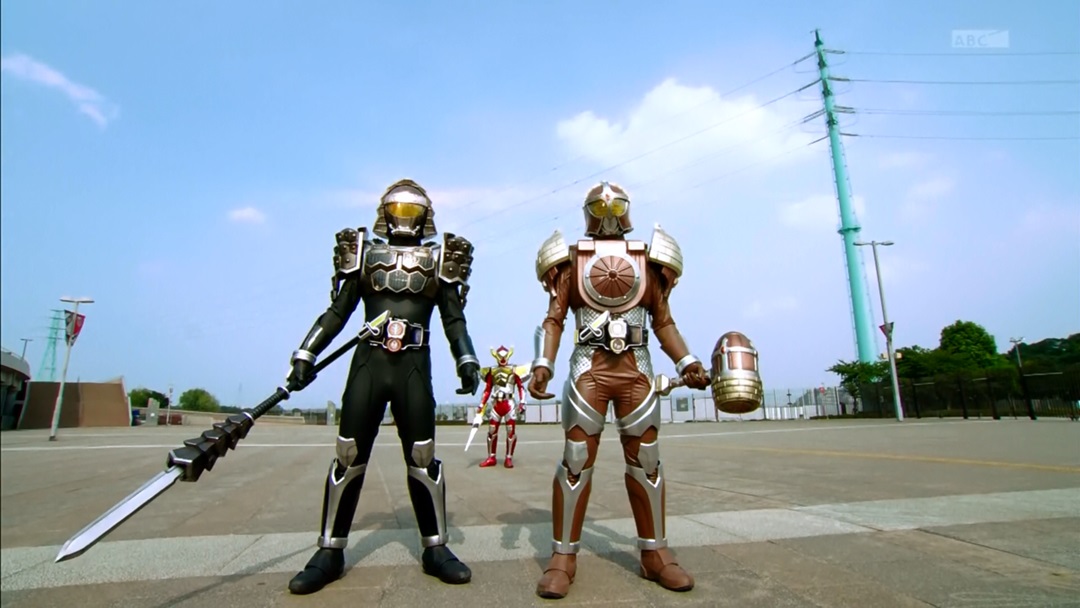 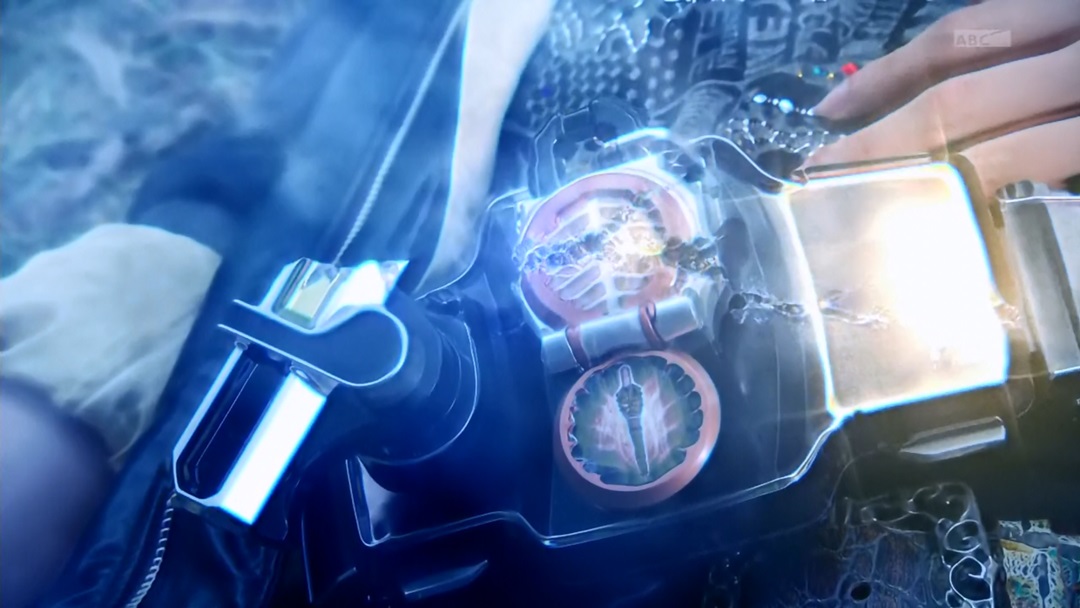 After losing his powers, Hase discovers that he can longer compete with the other dance teams. Even his own team begins to lose respect for him because of the lack of power he holds. On top of that, he begins to hallucinate seeing Inves monsters and Kamen Rider Zangetsu. Upon stumbling in to a construction site while Kamen Rider Gaim and Kamen Rider Baron fight against Kamen Rider Zangetsu Shin, Hase realizes the Helheim fruit have the ability to grand immense power. Without thinking twice, he quickly bites in to the fruit against the wishes of the others and quickly transforms in to the Hekija Inves, losing his mind and lashing out like a real monster. 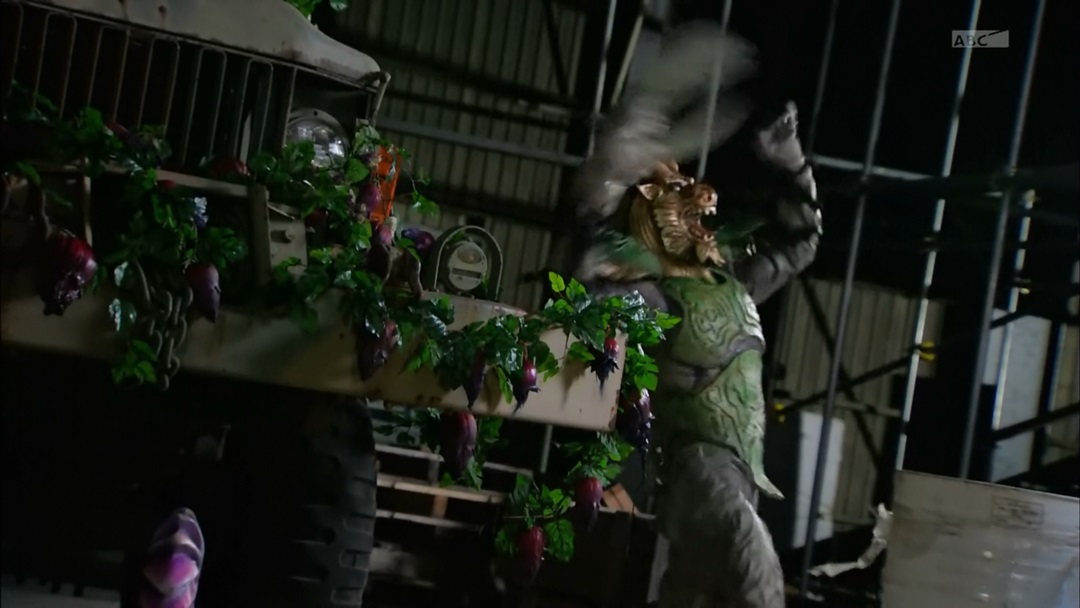 Kazuraba Kouta chases after Hase as he continues to transform back and forth between half-human and half-Inves. Unable to control himself, Hase transforms back in to the Hekija Inves and ends up hurting a member of Team Gaim, causing Kouta to transform in to Kamen Rider Gaim to fight him. But he is unable to make the fatal blow – how can he? This is his friend, this is Hase, there has to be another way to get through to him, to help him. Kamen Rider Gaim refuses to kill Hase. It is then that the first appearance of the other Energy Riders is revealed, and Kamen Rider Sigurd appears. He quickly dispatches Hase, killing him with a new attack, and reveals himself to Kouta – he is in fact Sid the Lock Seed dealer, the man who started the whole mess in the first place. 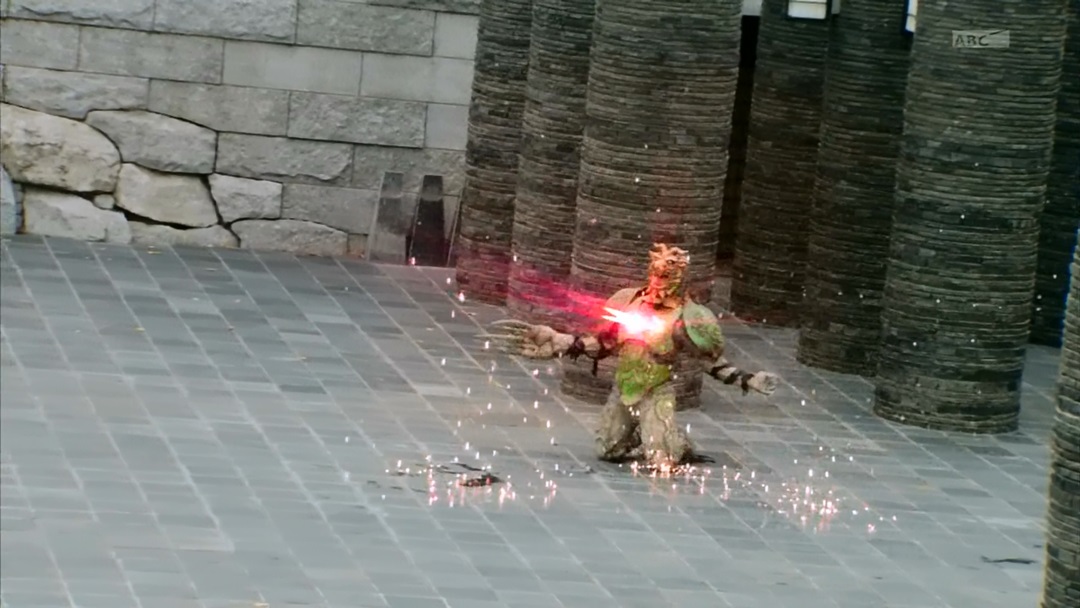 Hase is truly dead – he would not return to the show (well, we haven’t seen the finale yet) but he would appear in the alternate world that was the Kamen Rider Gaim Summer Movie. His Lock Seed, the Matsubokkuri, was a low power, generic Lock Seed. They would eventually be used in the mass production Sengoku Drivers – less powerful versions of the original Sengoku Drivers that did not DNA bond to their hosts but still granted increased power. Kamen Rider Kurokage would live on as the Kurokage Troopers, the foot soldier of the series (aside from the Inves). RIP Hase.

– Click here to check out our gallery of the Arms Change Kamen Rider Kurokage with Tulip Hopper figure by Den-O!

After the events of the Helheim Forest, Jonouchi left Hase as he was too weak to be of any help and allied himself with Kamen Rider Bravo, to learn how to be a real fighter. He would join with Kamen Rider Bravo in teaming up with Yggdrasill to try and stop Kamen Rider Gaim as he had become too powerful and was a threat to the plan to save humanity from Helheim. Kamen Rider Bravo and Kamen Rider Gridon became the new comedic duo of the series with plenty of sexual tension (come on, you have to admit, it’s totally there!). 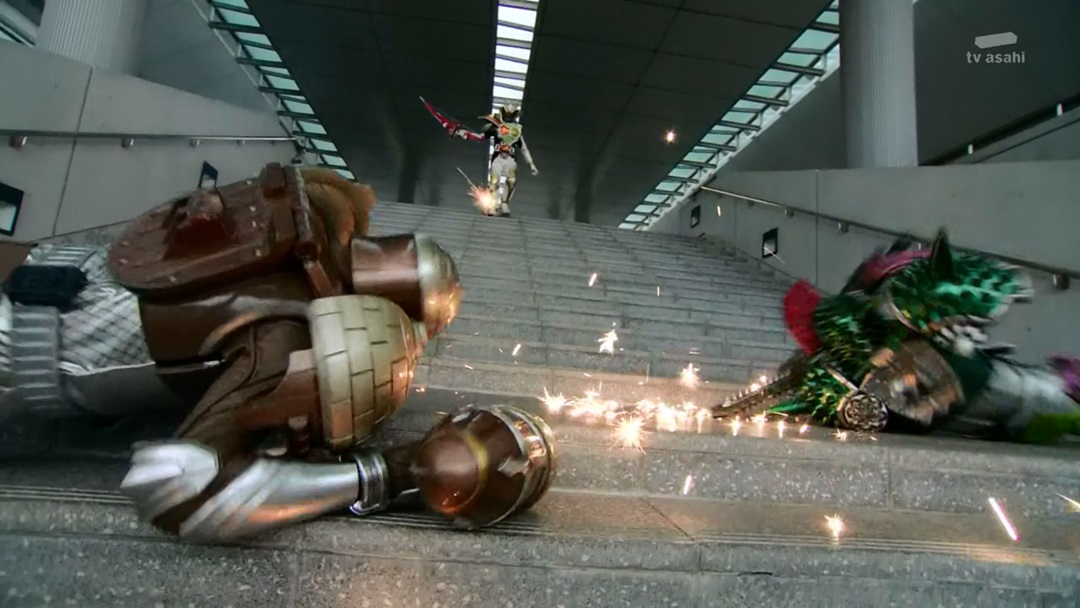 When the Overlords were all defeated and the city’s population was safe, Kumon Kaito revealed to the others that he was now Lord Baron and had the powers of an Overlord. His goal is to conquer the entire Earth and create a new civilization where the weak do not need to fear the strong. Seeing this plan as being evil and barbaric, Kamen Rider Gridon and his mentor, Kamen Rider Bravo, rush off and fight Kamen Rider Marika and Lord Baron, the Overlord form of Kamen Rider Baron. They both have their Sengoku Drivers destroyed, ending their tenure as Armored Riders and leaving them more or less helpless in fighting. 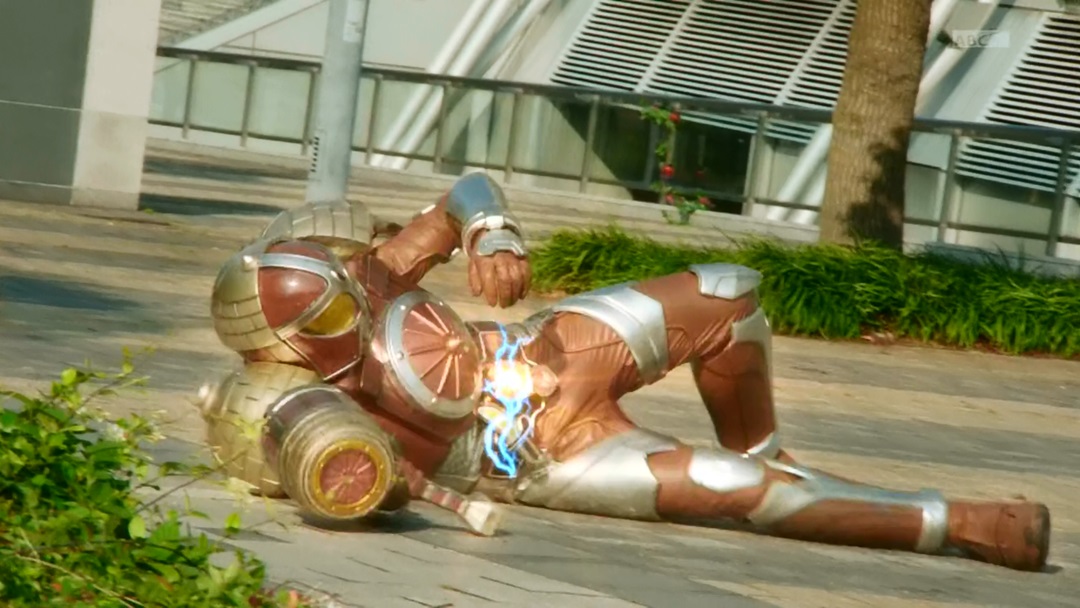 Having yet to learn the fate of Ryoji Hase, Jonouchi continues to hang missing posters on walls throughout Zawame City hoping that his once former friend is alive and well. It would appear through episode previews for the finale that after Kamen Rider Jam attacks, Jonouchi will grab a mass produced Sengoku Driver and a Matsubokkuri Lock Seed and transform in to a Kurokage Trooper to fight Kamen Rider Jam. Whether he will ever learn the fate of his friend has yet to be revealed, but Jonouchi experienced a great story arch in going from a scheming coward in to a fighting hero, gladly going toe to toe with foes much stronger than he was. 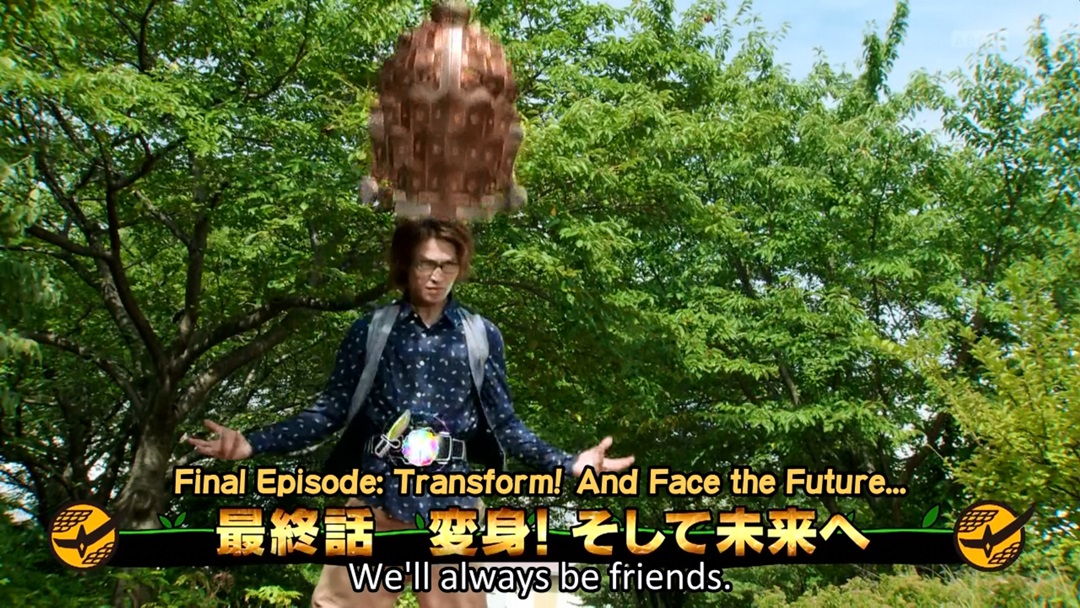 It should be important to note that early in the series, head writer Gen Urobuchi noted that he had big plans in store for the character of Jonouchi and Kamen Rider Gridon. Since the first scene of the first episode showed Kamen Rider Gridon standing alongside and fighting with Kamen Rider Baron, many speculated that he would join up and become an incredibly important character in the series. Instead, he became a purely background character but managed to steal the spotlight any time he was brought on screen. It leaves some to wonder if it was a red herring from Gen Urobuchi or if plans changed after that specific interview.

Our final Nut Bros. is none other than the surprisingly popular Mister Knuckleman, Kamen Rider Knuckle!

Zack started the series as the second in command to Kaito for Team Baron. But after Kaito learned the truth behind Yggdrasill, he appointed Zack as the new team leader and promptly quits the team. But before he does, he hands him a mass produced Sengoku Driver and Kurumi Lock Seed, telling him that he must become strong to be the leader. 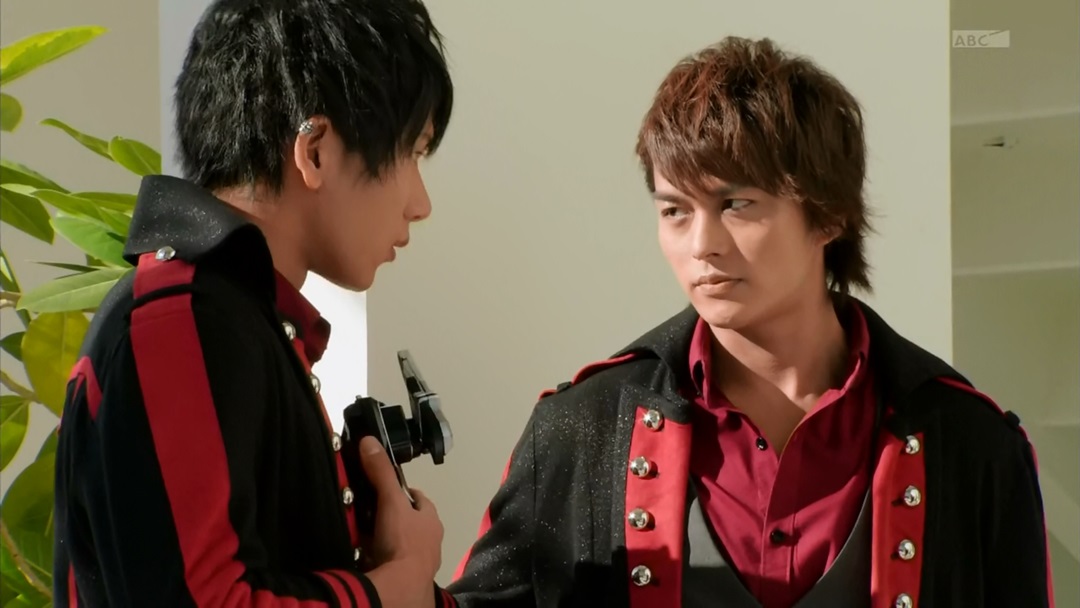 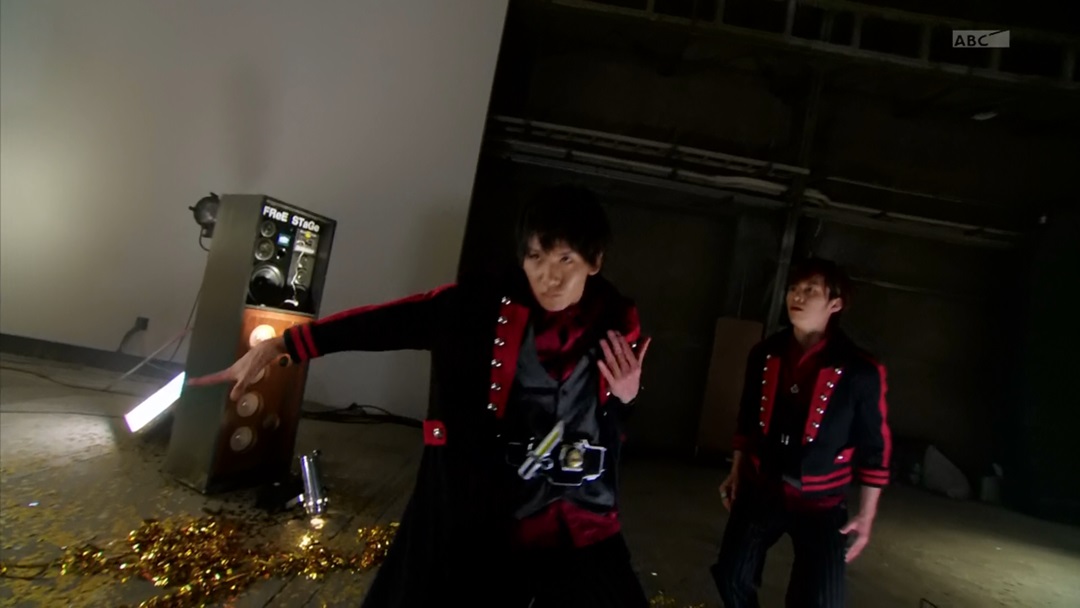 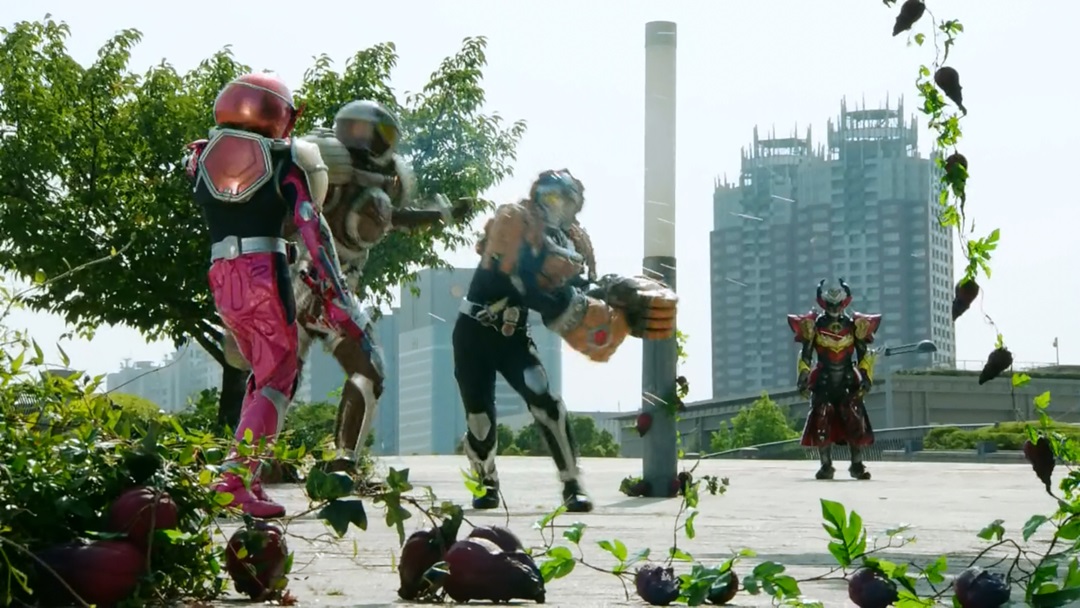 Zack realized that Lord Baron‘s plans for world domination were wrong and conspired with Oren (Kamen Rider Bravo) to create a bomb that would be strong enough to destroy Kaito once and for all. Discovered by Yoko (Kamen Rider Marika), Zack‘s plan fails and he is forced to fight his former idol and friend, Kamen Rider Baron. As they fight, Zack tells him that he has something to protect, something to fight for. Kaito, rather than destroying his former friend, simply destroys his Sengoku Driver and leaves him to faint. In the end, Zack decided that what he wanted to fight for was worth sacrificing himself for, and Kaito acknowledges this by informing Zack how strong he has gotten before knocking him out. 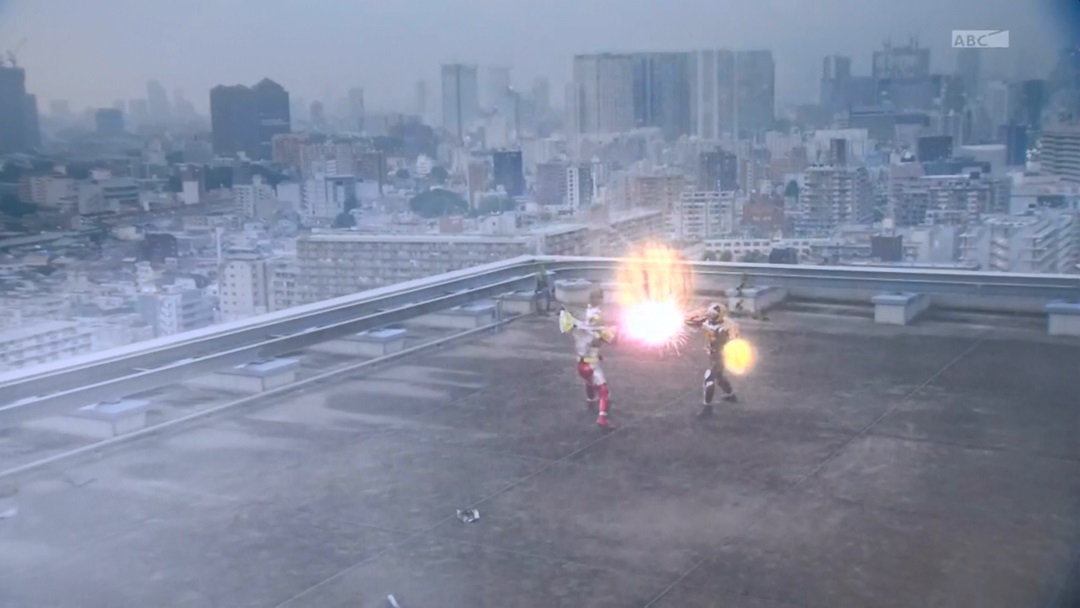 In the finale of Kamen Rider Gaim it would appear that Zack fights against Kamen Rider Jam without the use of any Sengoku Driver, helping showcase just how much of a hero he has become since the early episodes when he helped Team Baron cheat to win against his dance competitors.

All screenshots taken by TokuNation.com using HD video subtitled videos from Aesir Subs. Be sure to visit them to download all your Kamen Rider Gaim episodes within 24 to 48 hours of their airing in Japan!

So what do you guys think of our little Nut Bros. write-up? Did we miss anything major? What were your favorite moments of these characters? Join in the discussion thread. And come back tomorrow for our next celebration day where we stop and take a look at one of the main villains throughout the series, the Professor himself, Kamen Rider Duke!