Today marks two special occasions – for starters the final episode of Kamen Rider Gaim will air in Japan on Sunday morning or Saturday afternoon for those in the United States and Canada. Please make sure to join us as we watch the live stream of the final episode! Click here for live episode discussion as well as a link to the live stream. What an incredible ride it has been with this show – we’re sad to see it go!

The second bit of today? It’s Day Three of our Kamen Rider Gaim celebration! And today we’re going to celebrate everyone’s favorite short-wearing long-haired professor – Sengoku Ryouma aka Kamen Rider Duke! Everyone’s favorite Lemon Energy badass is getting his own special inclusion in our nine day celebration of all things Kamen Rider Gaim! So go ahead and click “Read More” to take a look back at the guy who, really, started it all. There are, of course, spoilers in our special review. Enjoy!

Many years before the events of the first episode of Kamen Rider Gaim occur, we learn that the Yggdrasill corporation was created in an effort to stop the inevitable invasion of the Helheim Forest in to our world. The man placed in charge of research and development was a man by the name of Sengoku Ryouma, henceforth known as Professor Ryouma. With his research he learned the vitality of the Helheim fruits and created the very first Sengoku Driver, designed to allow the wearer to use the power of the Helheim fruits as Lock Seeds, giving the user superhuman like powers. The very first test subject was none other than Kureshima Takatora who would become Kamen Rider Zangetsu. The entire purpose of the Sengoku Driver, originally, was to combat the forces of Helheim Forest. 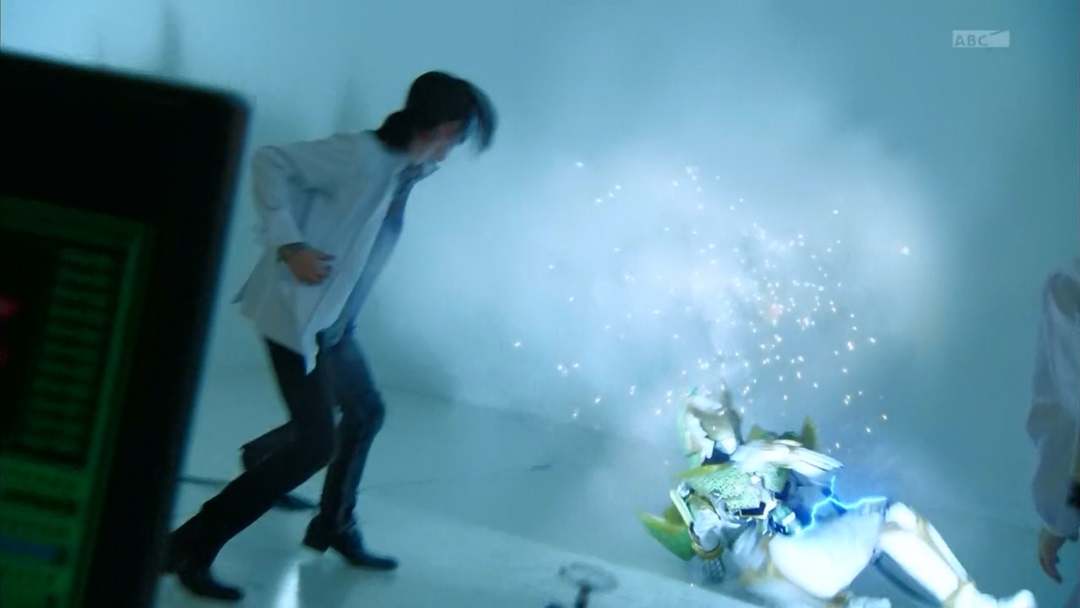 We soon learn that was not the case. Unable to discover a way to stop the impending invasion, Yggdrasill began work on Project Ark, to manufacturer a high number of generic, non-initialized Sengoku Drivers to be distributed to the public so that one billion lives could be saved – as the other six billion perished from the invasion. Professor Ryouma, as the head of research and development, was put in charge of this project. He created six additional Sengoku Drivers to be distributed by his partner Sid so he could gather data of different Lock Seeds and the effects that different people had when using them. From his research he was able to create the Genesis Drivers, allowing a select few to become Energy Riders, using a more powerful version of the original Lock Seed, as well as complete the mass production Sengoku Drivers, which can be seen used by not only the Kurokage Troopers but also Kamen Rider Knuckle, who uses a mass produced Sengoku Driver. 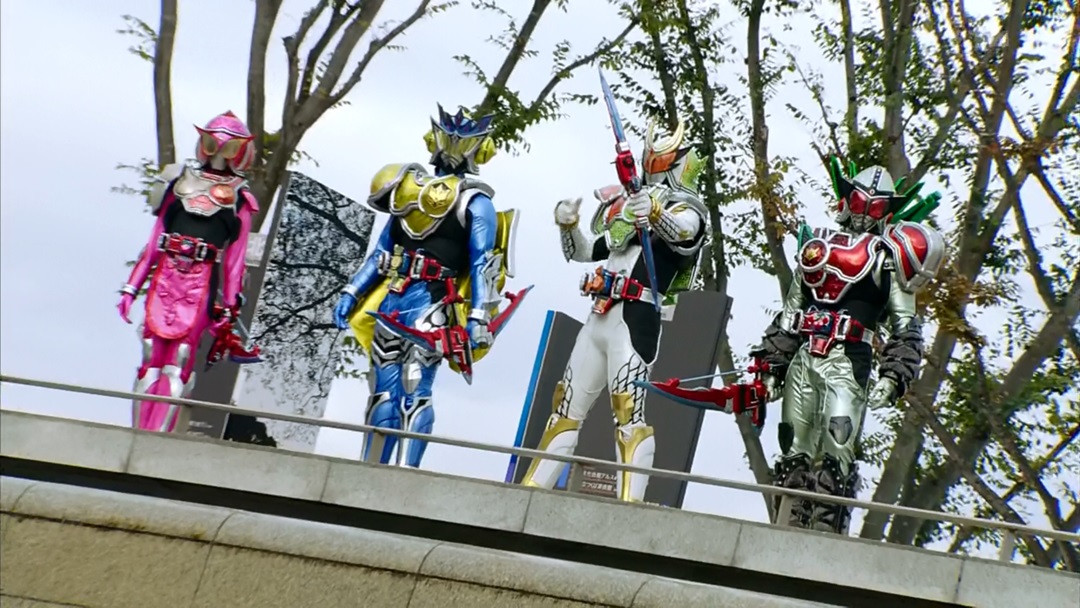 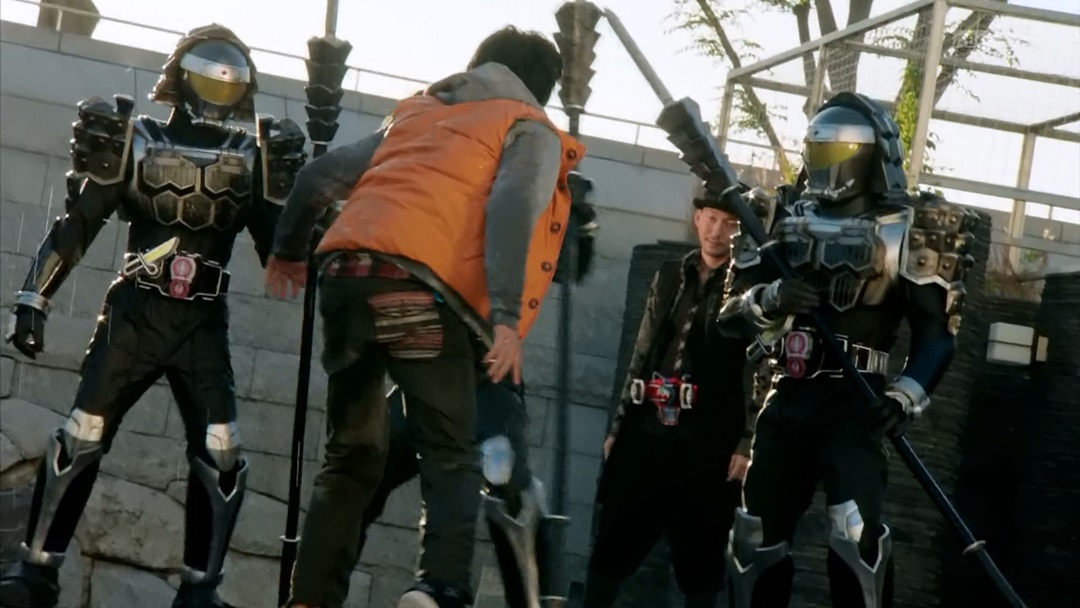 But Professor Ryouma kept a secret from his overseer of Project Ark – Takatora – when he discovered that there were intelligent life forms in Helheim Forest. It was at that time that he began to realize that Helheim Forest was not just a world of destruction but that it could carry the very key to the next stage of evolution for humanity. He began to propose a plan to Takatora how they could become Gods of a new world with the power of the forest, that they could be the leaders in the next stage of evolution. Takatora refused such ideas and pushed for the Project Ark to be hurried as quickly as possible. It was then that Professor Ryouma and Takatora began to see things differently – Takatora wanted to use the power to save humanity while Professor Ryouma wished to use the power to become a God in the new world that was coming. Because of their differences in that moment, Ryouma hid the revelation of the Overlords, the rulers of Helheim Forest, from Takatora.

Professor Ryouma would eventually ally himself with Kureshima Mitsuzane, the younger brother of Takatora. While Mitsuzane believed he was controlling Ryouma it would be revealed towards the end of the series that it was in fact Ryouma manipulating Mitsuzane and the consequences for Mitsuzane would be devastating.

Once Takatora discovered the existence of the Overlords thanks in part to Kamen Rider Gaim he immediately put a halt on Project Ark and all other research plans and ordered Ryouma to spend all his research going forward on figuring who and what the Overlords were and if they could somehow be reasoned with to save humanity. This obviously displeased Ryouma and he finally called his plan in to action. With the help of Kamen Rider Marika and Kamen Rider Sigurd, two of the other three Energy Riders, a trap was set for Takatora. He was betrayed by his colleagues and left to die by his own brother. The only thing left to do was to obtain the ultimate power of Helheim Forest. After Mitsuzane kidnapped Mai to “keep her safe during the invasion”, Ryouma manipulated the other Armored Riders in to attempting a rescue so he could reach his lab and observe the situation. He discovered the Overlord King, Roshuo, possessed the Golden Fruit and set in motion the other Armored Riders to go defeat him to save Mai. However, Roshuo implanted the Golden Fruit inside of Mai, and once Ryouma figured it out, he helped convince Mitsuzane that he was the only one who could save Mai‘s life. 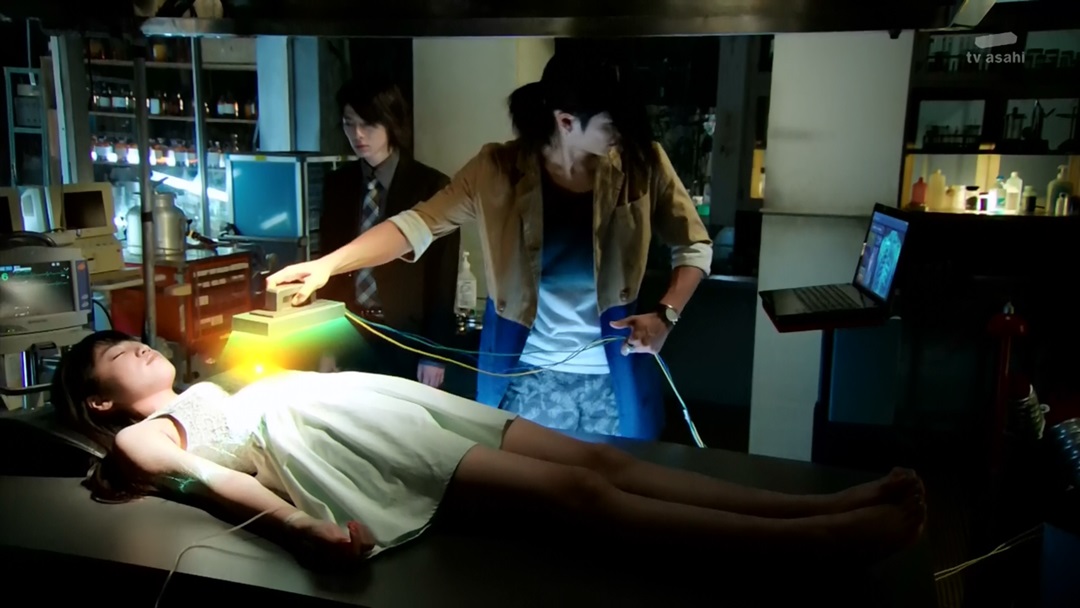 His plan now in motion, Ryouma knew the only way he could finish his plan was to somehow get Kazuraba Kouta to kill Kureshima Mitsuzane or, worst case scenario, have Mitsuzane kill Kouta. Convincing Mitsuzane that the only way Mai would ever be safe is if Kouta was out of the picture, he gave him an experimental Lock Seed that was locked away because it was too dangerous. He gave him the Yomotsuheguri Lock Seed which drained the very life force of its user to gain extra power. In short, the longer you used that Lock Seed the quicker you would die. Thinking it was the only way to save Mai from Kouta, Mitsuzane took it and went to battle. 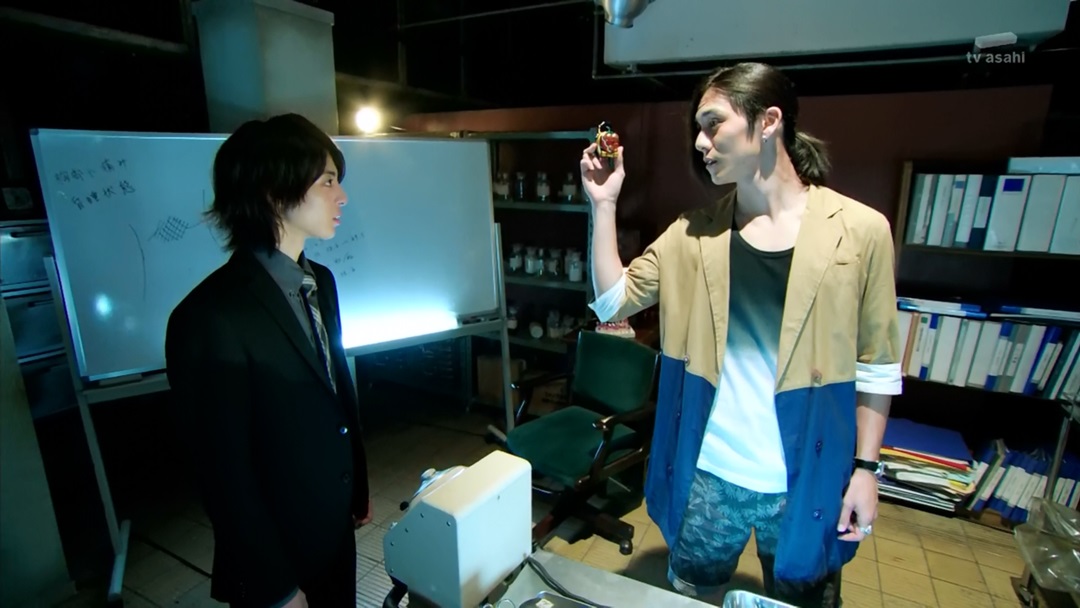 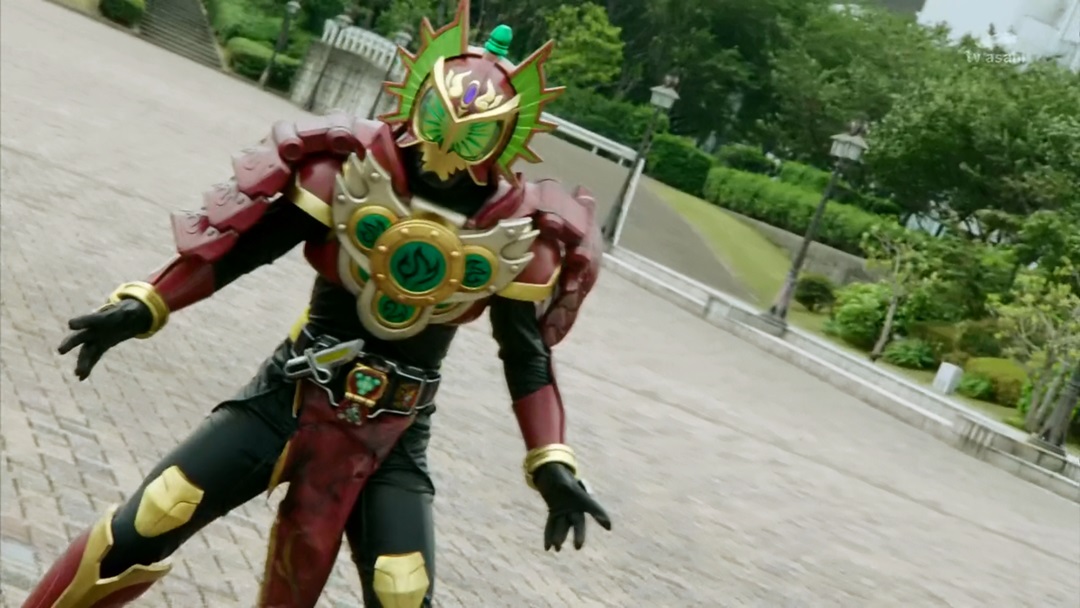 While alone with Mai, Ryouma successfully removed the Golden Fruit that was inside of her. To Mitsuzane‘s dismay, it also meant that Mai had to die as the fruit had fused with her heart. His plan finally at its conclusion, Ryouma disabled the Genesis Driver that Mitsuzane had been using and prepared to finish him off. At that point the Golden Fruit took the form of Mai and disappeared, dissolving all the hard work that Ryouma had done. As he struggled to cope with what had just happened, he was interrupted by Kaito and Yoko Minato. Discovering that Ryouma had killed Mai, they attempted to transform in to their Energy Rider forms but just as he did with Mitsuzane, Ryouma also disabled their Genesis Drivers. He then squared off with Kamen Rider Baron, easily over-powering him. 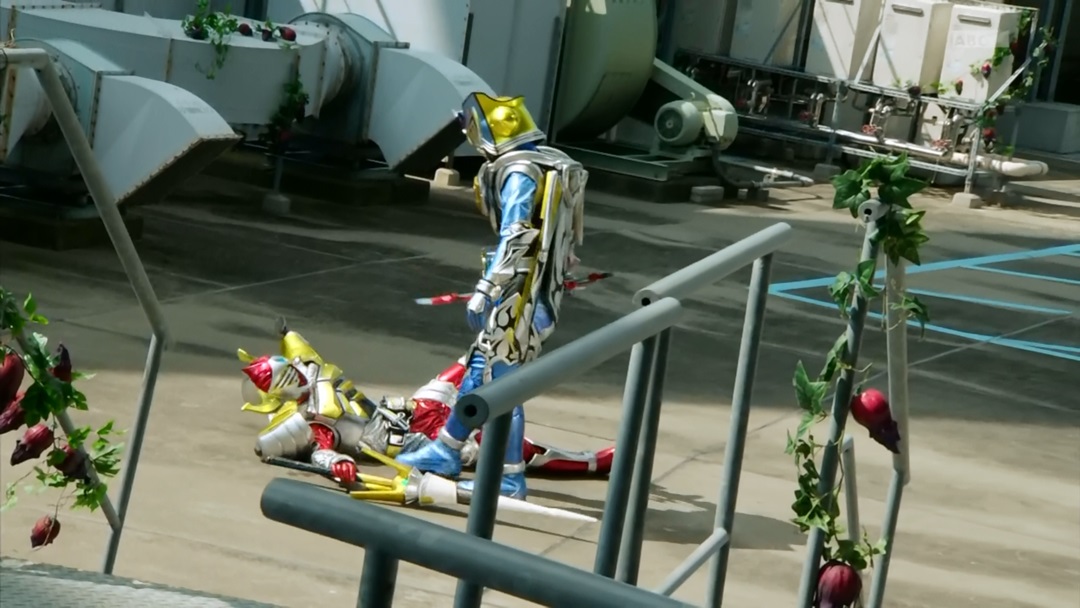 He discovered at that point that Kaito was infected by a wound from the Overlord Redue and laughed at Kaito‘s misfortune. In a fit of rage and nothing left to lose, Kaito consumed a fruit from Helheim Forest hoping it would give him the power to defeat Ryouma. It did, transforming him in to Lord Baron, the Overlord form of Kamen Rider Baron. Shocked and insulted at this development, partly because it made no sense as anyone who eats the fruit should be a mindless monster, Ryouma turned in to Kamen Rider Duke and charged Lord Baron. Alas, he was no match. Lord Baron easily defeated Professor Ryouma, and in the end, Professor Ryouma fell off the side of the rooftop, his reign of terror ending on the sidewalk below. 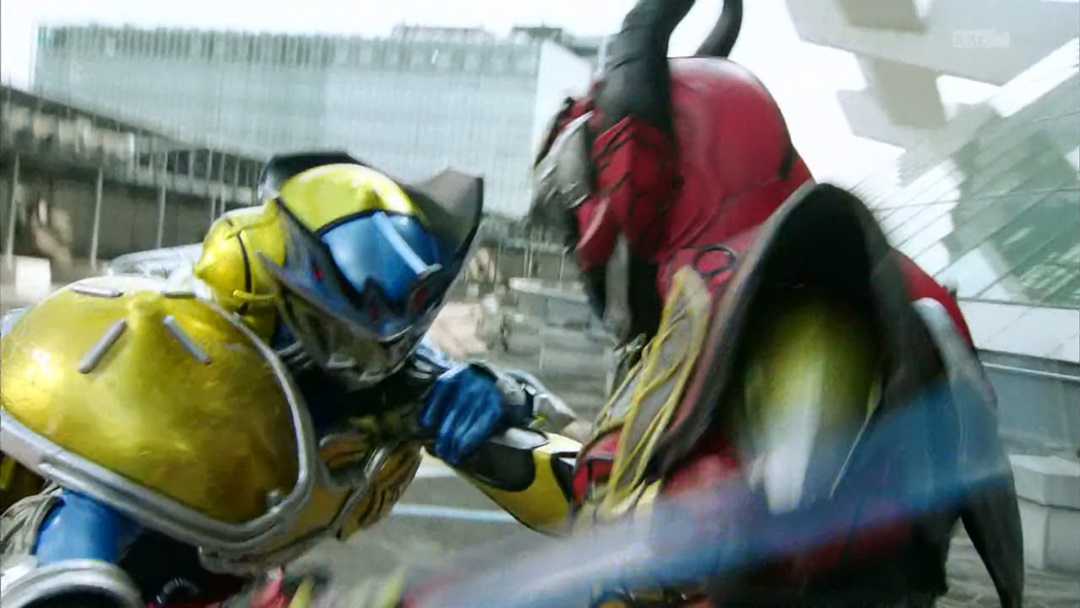 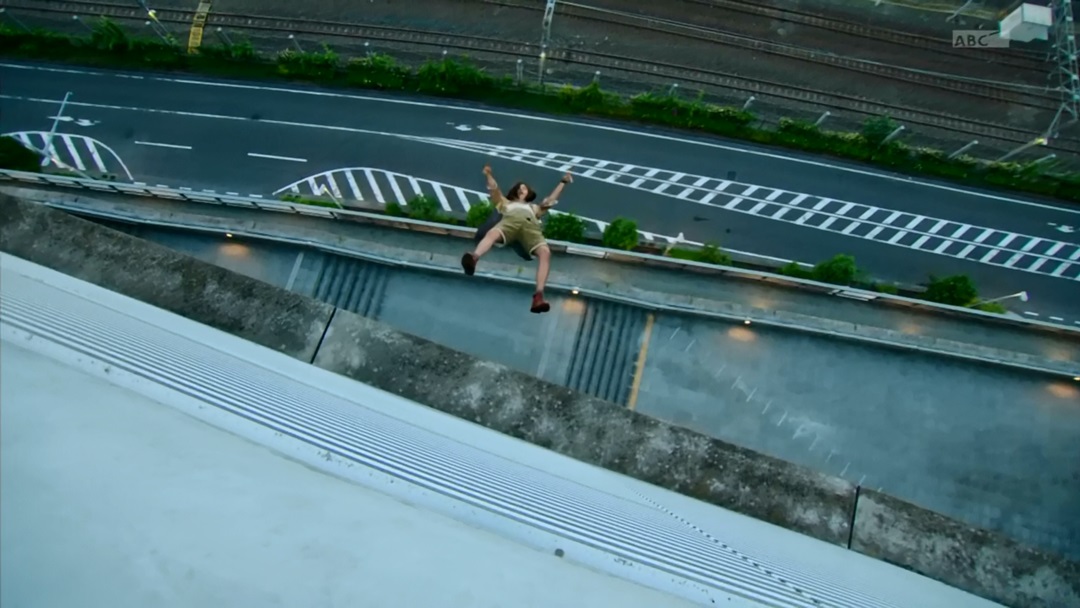 Some fun things to think about when it comes to Kamen Rider Duke and the Energy Riders – the ones who perished all perished due to massive impact, whether it be falling off buildings or being squished between walls. There’s also similarities between Professor Ryouma and Kaito – both wish to obtain great power for their own purposes, while Takatora and Kouta wished to use the power they had to protect the rest of the world.

Kamen Rider Duke received the least amount of face time compared to the other Energy Riders but arguably played one of the largest roles in terms of moving the story forward. From being a villain to an ally of convenience, Kamen Rider Duke quickly became a fan-favorite as his power seemingly knew no limitations. The mad scientist of the group of Kamen Riders, Professor Sengoku Ryouma aka Kamen Rider Duke goes down as one of the fun villains from any Kamen Rider series.

What are your thoughts on Kamen Rider Duke? Share your favorite memories of the short-wearing mad scientist in our discussion thread! And be sure to tune in tomorrow for Day Four of our Kamen Rider Gaim Celebration as we take a look at the other two pawns of Kamen Rider Duke – Kamen Rider Marika and Kamen Rider Sigurd!