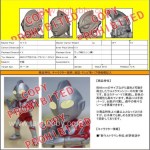 In a surprise announcement, the fantastic 66Action line will be expanding beyond just Kamen Rider and taking on other Toku proprieties starting with Ultraman!

The first wave of the 66Action Ultraman series will include the original Ultraman himself, Ultraseven, Ultraman Ginga Strium,  and Baltan Seijin

Due out for release in 2015, each one costs a wallet friendly 380 yen per singles.