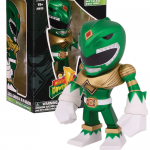 The second exclusive from Bandai of America for this year’s New York Comic Con has also been revealed on the Power Rangers Facebook Page and surprise! It’s another Mighty Morphin Green Ranger exclusive!

This figure (in non-metallic paint) was offered at this year’s San Diego Comic Con but will be available in limited quantities in metallic paint at this year’s New York Comic Con. Pricing has yet to be revealed nor has the number that will be available. If you’re a collector of these Tokyo Vinyl figures then this is probably on your list to pick up.

What do you think of this year’s New York Comic Con 2014 exclusives? Sound off in our discussion by clicking the “Discuss on the TokuNation forums” link! It’s sure to be a very interesting conversation!