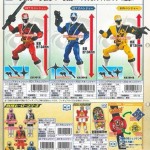 At last some new images for the 39th Super Sentai Series have come online!We now have full images of several key elements in the Shuriken Sentai Ninninger merchandise catalog, including:

*The Ninningers’ main weapon and changer, the Shinobi Ichibangatana -a sword that all five Ninningers take into combat.

*As reported previously, this years’ primary collector gimmick involves Shinobi Shurikens that can unlock new powers, weapons and can create new weapons and features when used with individual mecha as well as DX Shurikenjin. Each Ninninger carries Shurikens in the Ninnin Buckle.

*The Ninningers also have a blaster weapon, the Gama Gama Ju– a gun shaped like a frog.

*Another piece of the Ninningers’ arsenal is the Karakuri Hengen– a massive Shuriken capable of 3 distinctive forms- Blade, Claw and Bow.

*The last new Shuriken revealed in this catalog is the Goton Shinobi Shuriken which allows the Ninningers to attack with any one of five elements: Fire, Water, Wood, Metal or Earth.

Feel free to join in our ongoing Ninninger Catalog Discussion Thread & share your thoughts on all that this new Super Sentai Series has to offer!