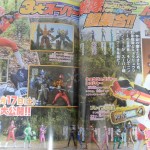 Another image from the upcoming crossover film Ressha Sentai ToQGer VS Kyoryuger: THE MOVIE has been posted online.

This scan confirms that all 10 Kyoryugers will indeed appear in the crossover! In addition, the upcoming Super Sentai team Shuriken Sentai Ninninger will make their first on-screen appearance in this special!

Finally, this magazine scan highlights the return of the Kyoryuger Ressha– part of a special transformation unlocked during the Hesei VS Showa Featuring Super Sentai Movie War released earlier this year.

ToQGer VS Kyoryuger is set for release on January 17, 2015! Stay tuned to TokuNation as we keep you up to date on this brave imagination experience!