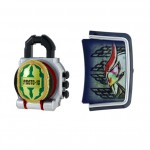 When you have a merchandise behemoth like Kamen Rider Gaim you do everything you can to keep releasing product. Bandai Japan has that figured out with the upcoming Blu Ray DVD release of Gaim Gaiden: Kamen Rider Zangetsu & Kamen Rider Baron which features the two popular Riders in a short spin-off story from the original story line from Kamen Rider Gaim. As we reported earlier regarding the upcoming release of the DX Taboo Lock Seed, this new DX Prototype Suika Lock Seed will release as a Premium Bandai exclusive in May of 2015 with pre-orders opening January 30th, 2015.

Special thanks to the Tokusatsu Network for the image and the information.