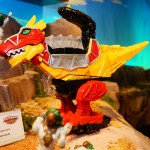 This is the Zord Reveal that was teased in yesterday’s press release from Bandai of America. The T-Rex Feature Zord features electronic sounds and gimmicks very reminiscent of the Transformers Age of Extinction figure Stomp & Chomp Grimlock so that should give you a fair idea of how it functions.

The “packaged” sample on display on the wall above the actual figure has a place holder in the box and is not the actual toy. In fact it’s the DX Bandai of Japan Gabutyra funnily enough. But the larger T-Rex Zord with the handle is what we’re getting.