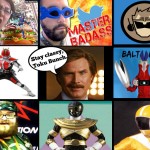 Following all the big news last week – what with the reveal of the concept images from the upcoming Power Rangers 2017 Movie and the revelation that PaperCutZ no longer holds the rights to publish any Power Rangers comics, there was a lot of discussion all over the Internet about both topics. So the gang from our very own Talkin Toku Podcast did what any good group of fans would do – they put 8 people in to a single recording session and told them to talk about it.

Join your hosts of the Talkin Toku Podcast – Kickback/Chris, Den-O/Jordan, and Sentai Tamashii/Tom – along with special guests hosts from the Ranger Command Power Hour Podcast – Trekkieb47/Eric, Secretrangerfan/AP, and TheCinemaSlob/Zach – along with MonkieRanger/Lee from the The Monkie Grid and baltmatrix/Matt from baltmatrix YouTube Video Reviews – as they discuss everything new with the Power Rangers 2017 Movie as well as the future of Power Rangers comics!

Download the episode direct by clicking the link below!

Find all of our guests at the links below!