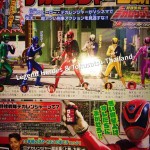 Several new items relating to the DekaRanger- 10 Years After V-Cinema project have been revealed!

The story begins when the DekaRangers’ boss, Doggie Kruger is accused of a serious crime. BanBan (the original DekaRed) is sent by the Fire Squad to investigate and in the process reunites the DekaRanger team.

A number of guest stars have also been confirmed for this project:

*Ryusei Nakao will be returning to play the DekaRanger’s old enemy, Agent Abrella.
*Yuto Uemura, who had a minor role in two early DekaRanger episodes, will return as DekaYellow’s husband.
*Takumi Tsutsui (best known as the Metal Hero Jiraya) will play a criminal pursued by Doggie Kruger.
*Isao Sasaki– the singer who performed the original series’ ending theme Midnight DekaRanger will have a minor role.

DekaRanger 10 Years After will be released on DVD & Blu-Ray on October 7th 2015! Feel free to join in our Ongoing Discussion Thread and share your thoughts on this upcoming special reunion!