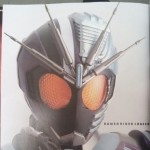 Looks like the Kamen Rider Drive universe isn’t out of gas just yet!

A new V-Cinema project has been revealed– starring the hero-turned-villain-turned-hero, Kamen Rider Chaser!