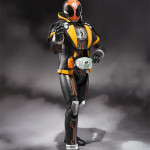 Kamen Rider Ghost Ore Damashii comes with the GanGun Saber which appears able to transform between Gun & Saber forms, and Yurusen! For those interested in show-accuracy, it appears Ghost also includes 2 versions of his hood!