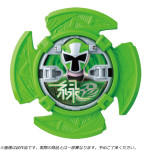 Just when you think Bandai’s done releasing Nin Shruikens , they throw one more at us: tying into the release of Shuriken Sentai Ninninger: Ninnin Girls VS Boys Final Wars in the coming months,Premium Bandai’s announced that the MidoNinger Shuriken will be included with a limited edition version of Blu Ray release, similar to the Kamen Rider Gaim V Cinema packages.