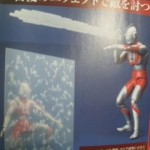 With Ultraman set to celebrate his 50th birthday in July (along with the birthday of his creator Eiji Tsuburaya), many collectors speculated that this month would see the release of the S.H. Figuarts Ultraman figure previously revealed at last year’s Tamashii Nations event. And thanks to the latest set of magazine scans, we can now confirm this to be the case!

S.H. Figuarts Ultraman will be a mass release figure, retailing for 5200 yen. His accessories include a selection of effect parts, including of course his signature Specium Ray attack. In addition to this two scaled “Option Act Building Sets” will be released that month, retailing at 2700 yen each and coming in standard and damaged variants. However if both of these things take your fancy, a special Ultraman 50th Anniversary set is also being released, costing 8000 yen and including Ultraman, a special colour version of the building set AND a scaled Alien Baltan spacecraft.

As for Baltan itself? That’ll be joining the line the following month in August, retailing for 5940 yen. No word on the previously revealed Zetton figure yet, but expect that to join shortly afterward.

Stay tuned for more information on these figures in the coming week!