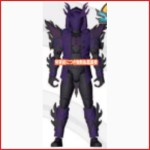 A teaser for an upcoming release in the Ghost Change action figure series has given us the best glimpse yet at Kamen Rider Specter in a new form- DEEP SPECTER!

The figure appears to be a heavily modified Specter with several new armor bits. How this release can interact with other Ghost Change toys remains unknown at time of writing.

In addition, a new toy listing has surfaced online for a new roleplay release: the DX Extreme Loaded Deep Slasher! This seems to be Deep Specters’ signature weapon; allegedly a modified rerelease of Kamen Rider Ghosts’ own Sunglas Slasher.

The Deep Slasher is set for release in April 2016 at a price of 5200 Yen. Be sure to join in our Ongoing Discussion Thread to share your thoughts and fears about Kamen Rider Specter and his exciting new abilities!