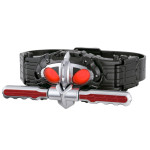 Hot off the heels of the recently announced Kamen Rider Amazons film project, Premium Bandai just launched a pre order page for a new DX Amazon Driver, based on the very same one seen being used by Amazon Omega.

More details about the piece will be released April 1st 2016 when pre orders will begin. For now, all we know is that it will cost 8,100 yen and will ship out in August 2016.