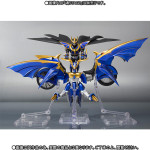 As was the case with the previously announced Dragranzer, Darkraider will be released in two ways. The first is part of a two-pack with the previously released S.H. Figuarts Kamen Rider Knight Survive, costing a hefty price of 16,200 yen. This set will come packaged with all of Knight Survive’s accessories (replacement hands, the Dark Visor, two versions of the Dark Blade, a selection of Advent Cards and a clear Tamashii stage) as well as connection parts of the Dark Visor to the bike and swappable cape parts for Knight.

However if you already own a Knight Survive figure, you can instead opt for the single release of Darkraider, which instead costs 11, 880 yen. However this will only come packaged with the Dark Visor connection parts and swappable cape.

Both versions of the figure are due for release in August and are Tamashii web exclusives. Check out the full selection of images after the jump.