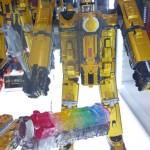 Ressha Sentai ToQger’s begun airing in Korea under the Power Rangers Train Force name, and a it seems that a rather peculiar item’s been spotted with a gold colored DX ToQoh having seen in the wilds.

At the same time, the same product’s been spotted in Hong Kong where they’re also airing dubbed ToQger as a Toys R Us exclusive item. For those of us overseas, the DX Gold ToQoh’s occasionally been spotted on Ebay for varying prices. Hopefully, with this item being released in Hong Kong it will become more widlely avalaible.