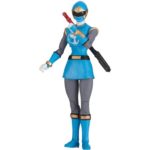 At Toyfair several months ago, Bandai America announced that a new line of Power Rangers Legacy action figures was in the works, featuring characters from across the franchise’ history.

Now at last the first images of this new Legacy figure line have been found online! Early listings on Walmart.com (which have sadly been removed) showed off several detailed images of action figures based on-

Sadly the price of these new Legacy figures has not been revealed at time of writing. Stay tuned to TokuNation for further details!