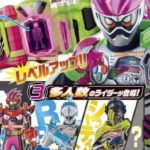 Following the brief teaser image from yesterday, we now at last have some official new details for the 18th Heisei Rider series- Kamen Rider Ex-Aid!

Perhaps most exiting, this series will again feature MULTIPLE Kamen Riders from the start! Two new Riders are revealed alongside Ex-Aid in these early scans:

Two more Riders have been revealed in toy catalog scans:

All Riders appear to use the same Driver- which, according to previous trademarks, is called the GamerDriver. It appears the Driver uses miniature devices (referred to as Gasshat in early trademarks) to make the Riders Level UP and unlock new powers.

Kamen Rider Ex-Aid is currently on track to premiere October 2, 2016! Stay tuned to TokuNation as we keep you up to date on all new Rider news!