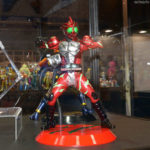 Pricing and release date are yet to be revealed, so stay tuned to Tokunation as more information is announced!