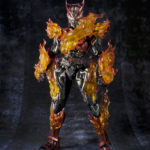 S.I.C Drive Type Speed will be avalaible this Holliday season, released among the December batch of Tamashii Pick Up releases for 7800 yen.

The figure is shown to include both the Door Gun, Handle Sword, and Max Flare effect parts among it’s accessory count.