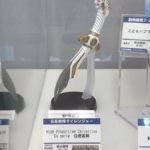 Power Morphicon isn’t the only place for Ranger news this weekend; news just broke over Ranger Board that Bandai’s  Sentai High Proportion Series is expanding into DaiRanger, with an s  HPC Byakkoshinken aka Saba coming down the pipeline.

Having been revealed at an unnamed trade show in Japan, HPC Byakkoshinken appears to be a Premium Bandai exclusive retailing slightly higher than the last couple of HPC releases at 2160 yen but appears to include a display stand. There’s currently no word on when pre orders for this piece will be avalaible or when it’ll come out, though stay tuned and we’ll bring you more up to date info as it’s made avalaible.