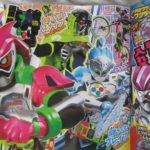 At last we have some up-close scans of the upcoming Kamen Rider Series, Kamen Rider Ex-Aid!

Among other details revealed by early scans, it seems the underlying secondary theme of this new series is medicine.

*Our hero, Kamen Rider Ex-Aid (human name: Houjou Emu is a medical intern, who encounters a mysterious lifeform known as the Bugsters.
*The next warrior, Kamen Rider Brave (whose true name is Kagami Hiiro becomes a Rider to study this new lifeform.
*Rounding out the early group is Kamen Rider Snipe, (aka Hanaya Taiga) a FORMER doctor who loves videogames and seeks a new challenge.

Working behind-the-scenes on the Riders’ new adventures is the mysterious Genmu Corporation, a game-development company which may have connections to the Bugster attacks.

Definitely some exciting ideas for this new series! Kamen Rider Ex-Aid is still set to premiere on October 2, 2016! Stay tuned to TokuNation as we keep you up to date on all Ex-Aid reveals!