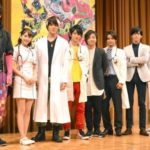 Particular highlights from this press conference include:

*The name Ex-Aid was coined from “Extreme” and “Aid”. The protagonist is referred to as a Doctor × Gamer who fights against the mysterious game viruses known as the Bugstar. As previously known, there will be various video game genres such as Action, RPG, Shooting, and Racing. Each genre will be represented not only by a Kamen Rider but by various effects that will be featured in fight scene!

*Ex-Aid’s human name is Emu Hojo, played by Hiroki Iijima. Emu is a medical student (studying pediatrics) at Seito University Hospital, which appears to be the central location for this series. In his off-hours, Emu is known simply as “M”- a genius-level gamer.

*Next in the cast is Kamen Rider Brave, aka Hiiro Kagami, a physician at Seito University portrayed by Toshiki Seto. He is normally rude & condescending towards Emu but is willing to fight alongside Ex-Aid to stop the Bugstars.

*Rounding out the Riders is Kamen Rider Snipe, real name Taiga Hanaya (portrayed by Ukyo Matsumoto.) This young man USED to be a doctor, until an unrevealed incident caused his medical license to be revoked.

*Our female lead this time around is named Asuna Karino, played by Ruka Matsuda. She is a nurse working for the Ministry of Health, and also has a mysterious secondary identity known as Poppii Pipopapo.

*Working behind-the-scenes for most events is a figure named Kuroto Dan, president of the game-designing Genmu Corporation (played by Iwanaga Tetsuya.)

Definitely an impressive cast for this adventurous new series! Kamen Rider Ex-Aid is currently on track to begin October 2, 2016. Stay tuned to TokuNation as we keep you up to date on all Kamen Rider News.