Our very own Sentai Tamashii/@SoulInkChu dropped by the Bandai America booth and asked some of the questions that we’ve seen floating around the fandom in the last few months! When is the Black and Gold Legacy Titanus being released? Will we ever see a Talon Ranger figure? What about those Dino Chargers that were gold in color and had previous Red Rangers on them? Aren’t we missing a couple of the 6.5″ Legacy figures from Ninja Storm and In Space?

We have answers! Click “Read More” to see them! Then join in our discussion!

TokuNation (TN): Dino Charger morpher has a sound byte when the Spino Charger is inserted that says “TALON RANGER”. Now, we all know who that’s supposed to be. We also know thanks to the French airings whether or not he appears, and he’s not shown in the final waves of toys. There’s a large contingent of fans who want a Talon Ranger/Deathryuger figure, just as they wanted a Poisandra figure … so how can we make that happen?

TN: What are the release details for the Black and Gold Legacy Titanus?

BA: Early Spring 2017, possibly June 2017. May have a more definite answer Saturday at NYCC. (we will revisit)

TN: There was some golden Dino Chargers that had previous Red Rangers on them that showed up online. Is that something that’s still releasing?

BA: Those were intended to be a convention exclusive that didn’t materialize. Currently, we have no plans on continuing the pursuit of the release of those items.

TN: In the new Legacy 6.5″ figure line, there’s four Rangers you skipped on the teams that were released or that have been shown to release – the remaining 3 Ninja Storm Rangers, and the In Space Silver Ranger. Are there plans to get them released, or not at this time?

BA: All will be revealed in time … stay tuned! ;) (NOTE: We re-worded the answer as we don’t believe the answer originally given is meant to be shared at this time. But in our opinion, the answer was Yes, and soon)

TN: When do you plan to announce the mystery Legacy 6.5″ figures that release as part of the Zeo waves?

BA: The molds didn’t make it in time to be revealed at New York Comic Con. We will reveal them in the near future.

TN: Are there any plans to continue the “TokuNation Edition” repaints, you know, the green/black/yellow Megazords, etc. 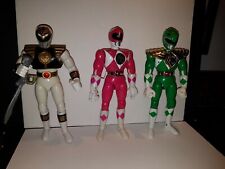