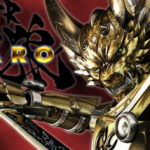 This past weekend at Atlanta’s Monsterama convention, Section 23’s Kraken Releasing announced that they will be releasing the original 2005 GARO tokusatsu series in the West in 2017. While the specifics of this release are currently unconfirmed, Kraken also revealed that they are also making plans to release subsequent entries in the franchise as well.

This is pretty fantastic news for tokusatsu fans in the West, as yet another franchise finally makes its way across the pond officially. Will you be adding this release to your collection? Sound off after the jump!