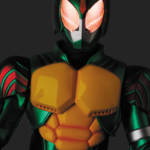 RAH Genesis Kamen Rider Amazon Omega is certainly a gorgeous piece, included with this figure are his Battle Grip weapon in both sickle and spear modes, extended forearm blades for the Violent Punish finisher, a personalized display base and to top it all off: the eyes will have an light up LED gimmick.

RAH Genesis Kamen Rider Amazon Omega will command a high price tag of 29,800 yen but he won’t be due out for awhile: he’s expected to come out May 2017 as a mass retail release.