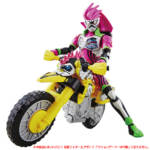 Let’s start this news post off by saying that a majority of us have always been big fans of Kamen Rider Gaim and the Arms Change gimmick. And many fans have already proclaimed that the Kamen Rider Ex-Aid show seems like a cross between Kamen Rider Gaim and Kamen Rider Drive, but with video games. And if you had any doubts as to why people feel that way – check out these images of some of the upcoming LVUR figures and accessories! Pictured in this post are:

We have extensive galleries coming soon of the first two releases in the LVUR series – Kamen Rider Ex-Aid and Kamen Rider Brave – coming very soon! Will these be joining your collection? Join the discussion!