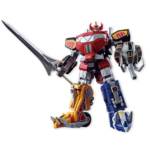 Bandai’s finally went ahead and released coloured images for the upcoming release of the Super Minipla Daizyujin in all of it’s glory!

The new photos not only gives us a clear look at the individual Guardian Beasts but also confirms that you’ll be able to create the Dino Tanker Mode. Not only that, but the transformation appears to be exactly like how it was in the actual show!