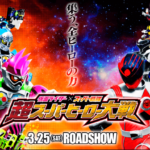 Toei has opened an official website for the next SuperHero Taisen film project!

This new movie will be titled Kamen Rider X Super Sentai: Chou Superhero Taisen. The official reveal features Kamen Rider Ex-Aid and the upcoming Uchu Sentai KyuRanger, along with a tagline stating Assemble, the power of every hero!

Chou Superhero Taisen is scheduled for release on March 25, 2017. Sadly, no other information about this new cinematic project is available at time of writing. Stay tuned to TokuNation for further details!