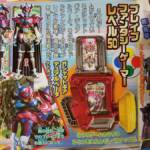 *This month, Kamen Rider Brave will be upgraded to LVL 50! Using a new version of the Gashacon Gear Dual Beta along with the new game Taddle Fantasy, Brave will transform into Kamen Rider Brave Fantasy LVL 50! This new form grants Brave a cape, special armor and apparently some magic powers as well.

*However, Brave will face an all-new challenger: ANOTHER Rider is joining the game! Labeled Kamen Rider True Brave, this newcomer is dressed in a white recolor of Brave Fantasy’s armor. Sadly, no other information about this new Rider is available at time of writing.

Last but certainly not least, the scans have revealed a pair of Gashats appearing in Ex-Aid spinoff material!

Definitely some exciting games ahead for these Riders! Stay tuned to TokuNation as we keep you up to date on all Ex-Aid news!